PullString and Alexa Hit the Road on The Grand Tour : Alexa Blogs

PullString and Alexa Hit the Road on The Grand Tour

On November 18, the first episode of The Grand Tour series marked the most-watched premiere in Amazon’s video streaming service’s history. British car enthusiasts Jeremy Clarkson, Richard Hammond, and James May returned to the screen for an all-new series of globetrotting adventures. Each episode takes Amazon Prime Video viewers to another exotic location.

For Amazon Alexa users, watching The Grand Tour is only half the fun. Pr 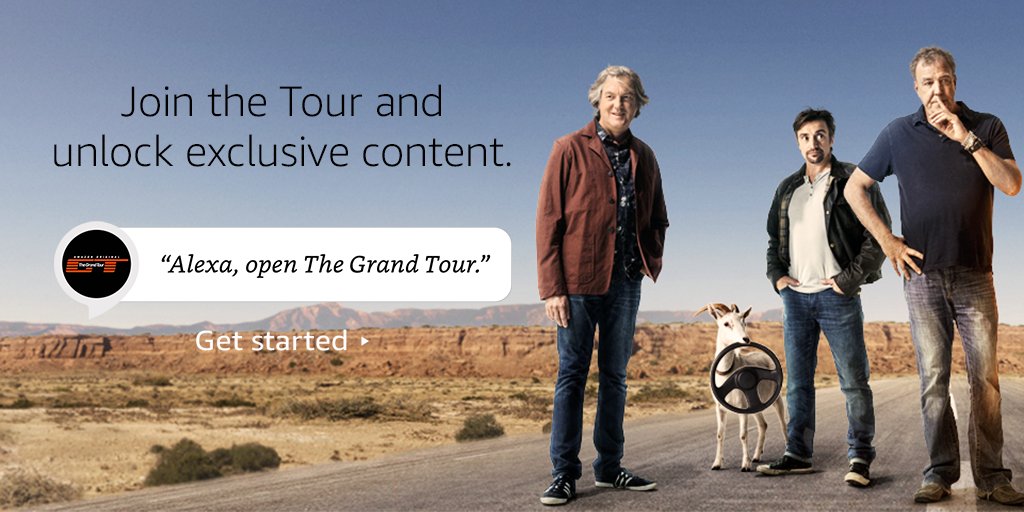 ior to the series premiere, Amazon debuted a companion skill built by PullString on the Alexa Store, available to its US and UK customers.

Each Thursday, prior to the show’s Friday airtime, The Grand Tour skill provides a new clue about what to watch for in the upcoming video episode. On Saturday, if viewers are truly “on the tour” and answer three trivia questions correctly, they’ll unlock exclusive video content.

The fun aside, what makes the skill unique is another first: the PullString Platform on which it was developed.

Mike Houlahan, head of PullString’s enterprise partner program, explains Oren Jacob and Martin Reddy co-founded the company in 2011. The two Pixar Animation veterans’ vision was to build lasting emotional connections between characters and audiences using two-way computer conversations. They noted an absence of professional toolsets for building conversational experiences between a character and its audience, and they set about filling that gap.

The PullString Platform is an all-in-one environment that lets developers and authors create award-winning conversational experiences, like the Lt. Reyes chatbot from Call of Duty and Hello Barbie.

Now, the company makes the power of the PullString Platform available to Alexa developers. “We are very excited to launch The Grand Tour skill,” Houlahan said. “We are simultaneously announcing the availability of PullString for the Alexa Developer Community to build their own Alexa skills.”

Learn more about the PullString Platform.

With the PullString Platform, a creative writer can prototype, develop, test and deploy an entire skill without writing a single line of code. That’s just what Danielle Frimer did.

Frimer is the creative writer who scripted the voice interaction model (VUI) for The Grand Tour Alexa skill using PullString. She worked with Amazon Prime Video to get the show’s actors into the recording booth to record dialog, and put it all together using the PullString Platform.

“I am not a developer in any way,” says Frimer. “With the platform, I could focus my attention on the creative aspects of it—the lines, the flow of things, the overall design—not on the underlying nuts and bolts of it.”

The skill’s design mimics the flow of The Grand Tour’s episode rollout. The voice interaction, of course, is peppered with the recorded dialog, making the experience even more engaging.

Frimer says PullString’s templates and documentation give developers a quick-start on different types of conversation projects. In all cases, it relieves both authors and developers of the complicated logic involved with a complex VUI model.

A platform benefiting both writers and developers

“We made a conscious decision to use the lexicon of human conversation, not programming and code,” says Ives. He cited how a debate team, a screenwriter or just everyday speakers use interjections, rejoinders and segues in conversation. Ives’ team created a structure that translates these interactions into API calls, so creatives like Frimer don’t have to spend time learning to code.

Of course, many Alexa skills do more than provide a conversation. They call third-party APIs and services to gather and present information, store personalization data and more. PullString accommodates the developers who make those things happen, too.

Most developers are familiar with dev tools like Xcode or Eclipse, which let them create both visual user interface and the code that drives it. With Alexa, conversation is the user interface. Creating a conversational experience requires a departure from traditional GUI-based design and development. Conversations are complex and fluid, and interjections are common.

Besides conversation, PullString lets you add calls to APIs and web services to do whatever other actions you need to support your experience. And like an IDE, PullString has a full debugger, letting you step through (and into) lines of dialog, setting breakpoints and examining variables.

“If you need to hit a web API or a [AWS] Lambda function to serve up special content or do some number-crunching, we support that,” says Ives. “Maybe you want to interface an IoT device via conversation, we support that, too. PullString Platform is a rich, conversational IDE in that way.”

Letting Alexa developers keep their eyes on the road

Houlahan says most companies have creatives design the user experience — the conversation — while programmers write the code to bring in the supporting context and data in parallel. PullString supports both types of development in one environment.

PullString Platform lets Alexa developers keep their eyes on the road. It abstracts the APIs needed to build a skill, letting authors and developers focus on the design and user experience.

“We want to be wherever computer conversations are happening,” says Houlahan. “The past couple of years have seen Alexa take off as the premier environment for voice-driven computing. It is just an obvious place for us to be.”

To experience the combined power of Alexa and PullString Platform, buckle up, enable The Grand Tour skill and watch the next episode.