In just over month, the holiday season officially kicks off. Connected devices like phones, tablets and streaming video set-top boxes continue to be popular gifts. And for app and game developers, this means a bonanza of downloads and new customers.

To help you get focused, we’ve compiled three stats that are important for mobile app developers:

The holiday season unofficially kicks off on Thanksgiving, and it’s also the unofficial kick-off to a very lucrative season for mobile app developers.  Maybe it’s the extra free time people have because of the holiday, or perhaps it’s treating themselves to new tablets and phones on Black Friday, but what we have seen is clear: customers purchase 50% more apps Thanksgiving week, than an average week the rest of the year.

Put another way, you will get 50% more revenue in this one week than you would on any other average week this year.

Submit your app now to make sure it’s available for Thanksgiving week.

Thanksgiving week is a good start, but things really start to get interesting on Christmas day.  According to Flurry Analytics, Amazon sees a particularly large number of device activations on Christmas day—24 times the typical number for any other day in 2013. 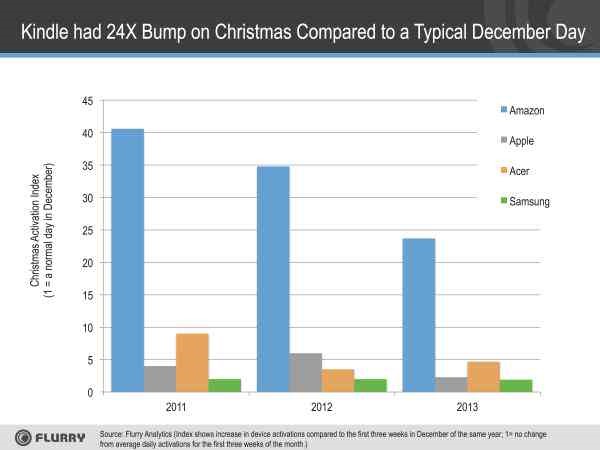 This is a huge opportunity for Amazon Appstore developers.  The Amazon Appstore is preloaded on Fire tablets, Fire phone and Fire TV, so when the holiday “bump” happens, your apps and games will be ready to be discovered and downloaded by new customers.

Submit Your Apps Now to Maximize Your Holiday Bump

The Amazon Appstore has never been available on a broader range of devices and platforms.  Want to reach more customers during Digital Week?  Submit your app now to make sure it’s available for Thanksgiving week.