The Alexa Voice Service (AVS) Device SDK provides you with a set of C ++ libraries to build an Alexa Built-in product. With these libraries your device has direct access to cloud-based Alexa capabilities to receive voice responses instantly. Your device can be almost anything – a smartwatch, a speaker, headphones – the choice is yours.

Each component exposes Alexa APIs to customize your device integrations as needed. The SDK also includes a Sample App, so you can test interactions before integration.

For a complete list of releases, updates, and known bugs, see the SDK release notes.

The following diagram illustrates components of the AVS Device SDK and how data flows between them.

The green boxes are official components of the SDK – they include the following items:

The white and blue boxes aren't official components and depend on external libraries – these include the following items:

For general information about Alexa and client interaction, see the Interaction Model.

Here's an example interaction with the SDK. This process might vary if you've added or removed any components.

Here are some details about each individual component in the sequence.

The ASP isn't actually a component of the AVS Device SDK. It's software that lives on a chip (SOC) or firmware on a dedicated digital signal processor (DSP). Its job is to clean up the audio and create a single audio stream, even if your device is using a multimicrophone array. Techniques used to clean the audio include acoustic echo cancellation (AEC), noise suppression, beam forming, voice activity detection (VAD), dynamic range compression (DRC), and equalization.

The SDS is single producer, multi-consumer audio input buffer that transports data between a single writer and one or more readers. This ring buffer moves data throughout the different components of the SDK without duplication. This process minimizes the memory footprint, as it continuously overwrites itself. SDS operates on product-specific and user-specified memory segments, allowing for interprocess communication. Keep in mind, the writer and readers might be in different threads or processes.

The WWE is software that constantly monitors the SDS, waiting for a preconfigured wake word. When the WWE detects the correct wake word, it notifies the AIP to begin reading the audio. When using the AVS Device SDK, the wake word is always "Alexa." The SDK includes a connector for the Sensory wake word engine – However, you can use any wake word engine of your choice.

Note: Alexa doesn't require a WWE to operate. Alexa can also activate with Tap-to-Talk or through a companion app. By default, the SDK uses Tap-to-Talk. If you require a WWE, you must install it separately and license it for commercial use.

Responsibilities of the AIP include reading audio from the SDS and then sending it to AVS for processing. The AIP also includes the logic to switch between different audio input sources. The AIP triggers with the following inputs:

When trigged, the AIP continues to stream audio until it receives a Stop directive or times out. AVS can only receive one audio input source at any given time.

The ACL manages the network connection between the SDK and AVS. The ACL performs the following key functions:

The ADSL Manages handles incoming directives, as outlined in the AVS Interaction Model. The ACL performs the following key functions:

The AFML makes sure the SDK handles directives in the correct order. It determines which capability has control over the input and output of the device at any time. For example, if you're playing music and an alarm goes off on your device, the alarm takes focus over the music. The music pauses and the alarm rings.

Focus uses a concept called channels to govern the prioritization of audiovisual inputs and outputs.

Focus management isn't specific to Capability Agents or Directive Handlers. Agents that aren’t related to Alexa also use it. Focus management enables all agents by using the AFML to have a consistent focus across a device.

The media player isn't actually a component of the AVS Device SDK. The SDK comes with a wrapper for Gstreamer and Android Media Player. If you want to use a different media player, you must build a wrapper for it with the MediaPlayer interface.

All Alexa products should adopt the Security Best Practices for Alexa. When building the AVS Device SDK, you should adhere to the following security principles.

Watch the get started tutorial to learn about the how the SDK works and the set up process. 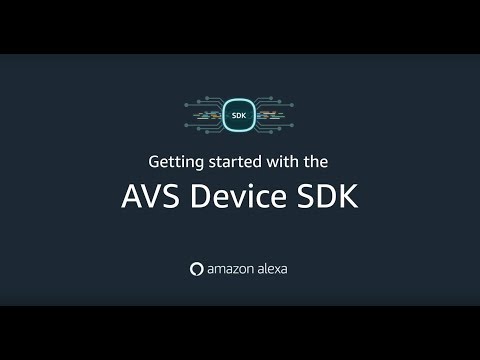