Discount Your App and Receive Free Merchandising from Amazon Appstore

As a mobile app developer, you are probably always on the lookout for ways to increase your app’s visibility. Sometimes a good, old-fashioned sale is all it takes, and Amazon’s Developer Promotions Console (DPC) now gives you the ability to specify when you want to discount your app or in-app items. As an added benefit, promotions set up through the DPC will be featured automatically on the Appstore Deals Section of Amazon Appstore in the US and Germany, if appropriate.

The DPC makes it quick and easy to discount the list price of your apps and in-app items, perfect for promoting an update, taking advantage of a holiday or special event, or conducting price elasticity tests. You can specify in the DPC when and where these discounts are available, activating them over time in one or more marketplaces, or at a single instant worldwide. For example, you might want Amazon to discount your app 50% to promote the most recent update, or offer certain in-app items for free during a limited time. These promotion “campaigns” are a snap to create.

Once your price drop promotion is live, it will automatically feature in merchandizing on the Appstore Deals section of the Amazon Appstore in the US (and Germany, when applicable) to help drive traffic to your app. 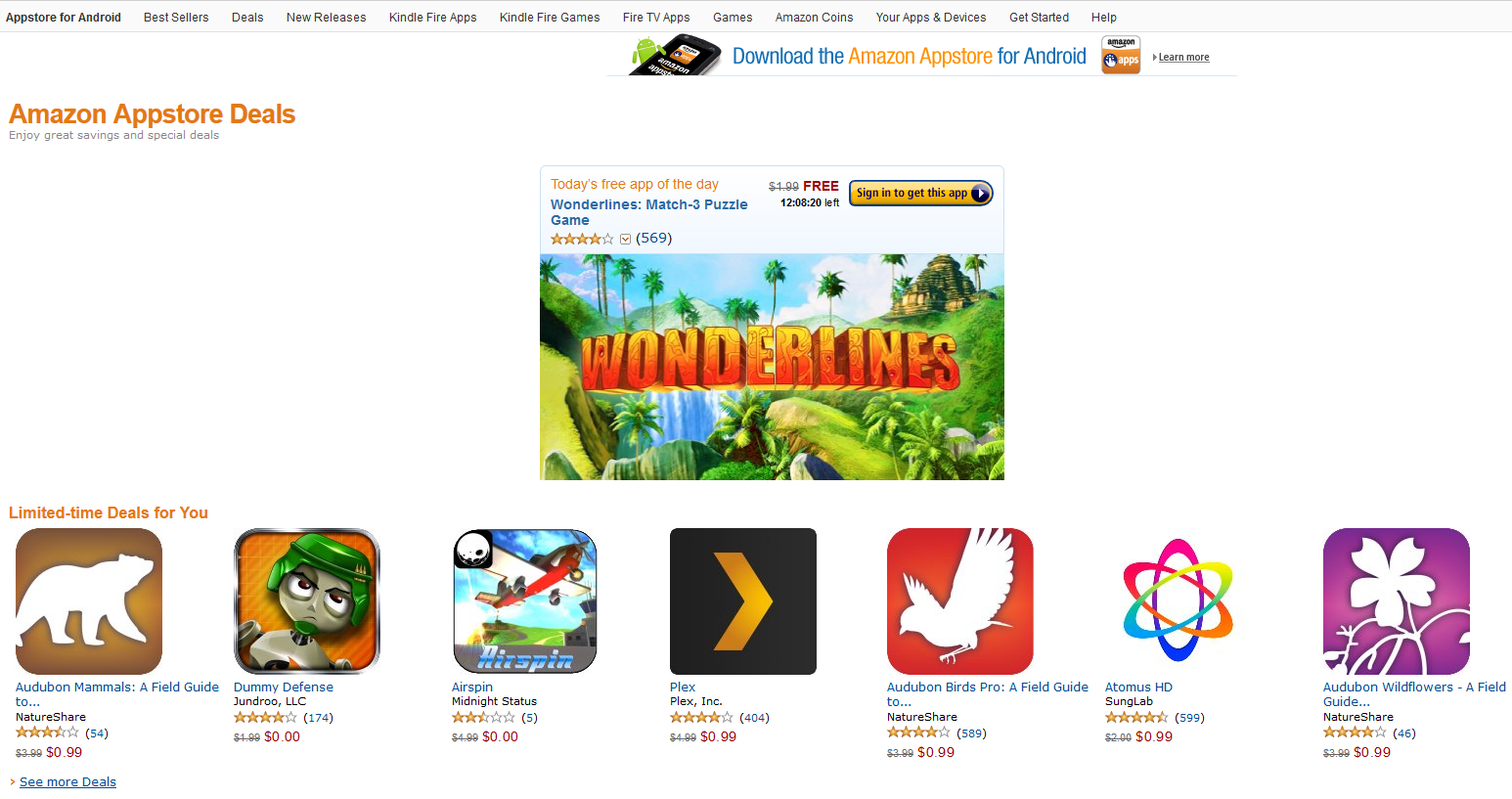 To set up a price drop campaign: 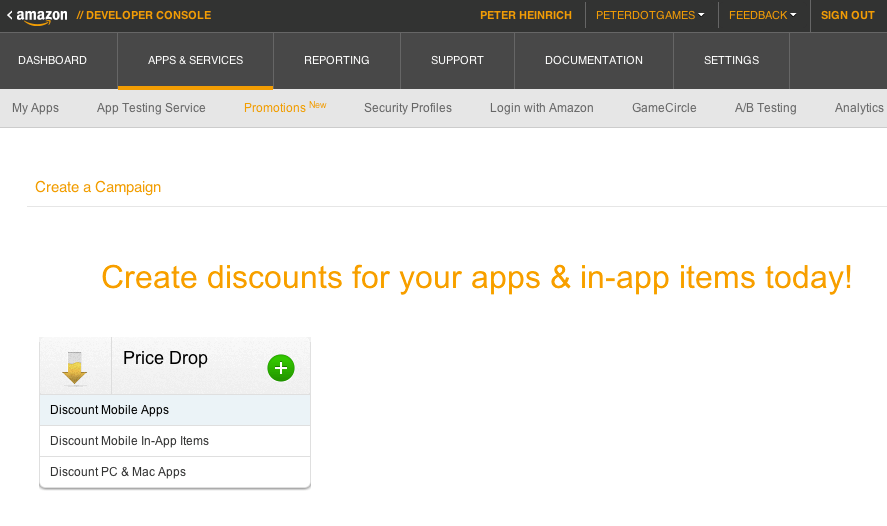 A single campaign can discount one or more mobile apps, mobile in-app purchase items, or PC and Mac apps at a time. Every campaign type allows you to set a start and end date, but you have even more control over mobile discounts.

For example, you might choose to discount an app only on Amazon’s main marketplace in the US, kicking off the promotion at one o’clock in the afternoon. You have the option of using fixed or relative start and end times. Fixed means the campaign will go live simultaneously across all marketplaces you select, measured in Pacific Time. Relative means start and end times will be adjusted to a reference time zone local to each marketplace (see below for the time zone used in each case).

To fix the campaign timing across all marketplaces, click the radio button labeled Start at a single global instant (relative to PDT). To stagger availability by marketplace, click Start at the same local time in each selected marketplace. 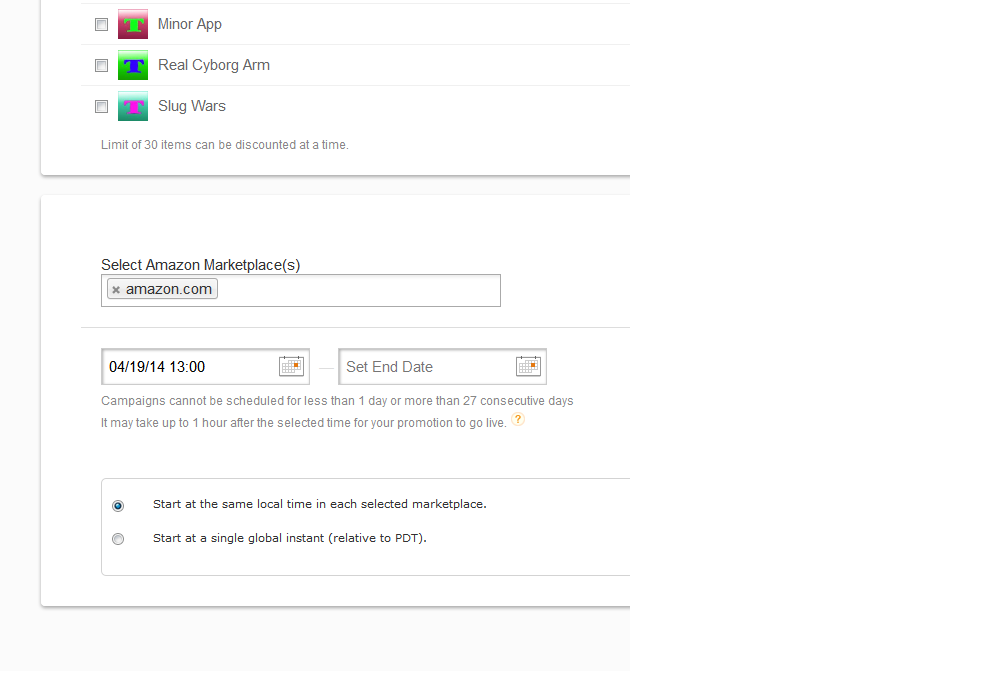 This setting applies to start and stop times both, which you can specify only once per campaign. If you want a promotion to be active at different times for different marketplaces (but not necessarily simultaneously, as with fixed), create a separate campaign for each marketplace.

You can only activate a campaign in marketplaces where your app or in-app item is available. If the specific items you want to discount are not available in China, for example, you will not be able to select amazon.cn as a target marketplace for the campaign. Publish to any of these marketplaces and they become valid targets for your promotional campaigns: 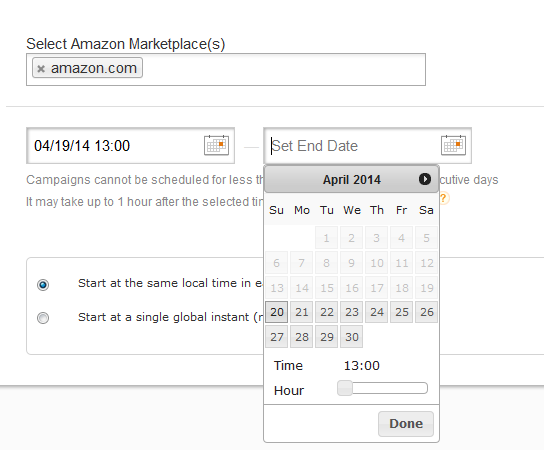 After you have set start and stop times for your promotion, click Next to define the discount amount, then click Next again to preview the campaign settings. If everything looks good, click Submit to save the campaign and indicate it should be launched when the time comes.

The Developer Promotions Console offers a self-service interface for scheduling temporary discounts on your mobile apps and in-app items sold through Amazon. It provides the ability to set up promotions to launch simultaneously around the world or at the same hour of the day in multiple marketplaces. These discounts can be made available everywhere or limited to specific geographic regions. Promotions you create are featured automatically on the Appstore Deals section of Amazon’s Appstore in the US and Germany, when appropriate.

Use this flexibility to refine your promotional campaigns and tailor them to your specific needs. Get more information about the Developer Promotions Console online, or simply log on to the console to look around and give it a try. 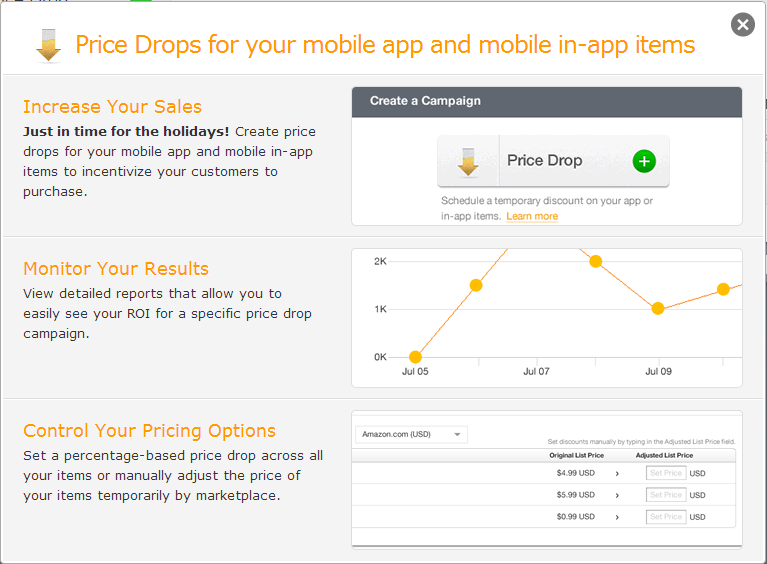 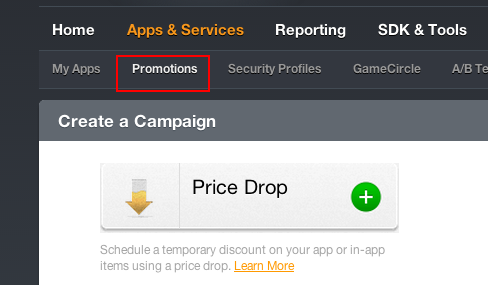 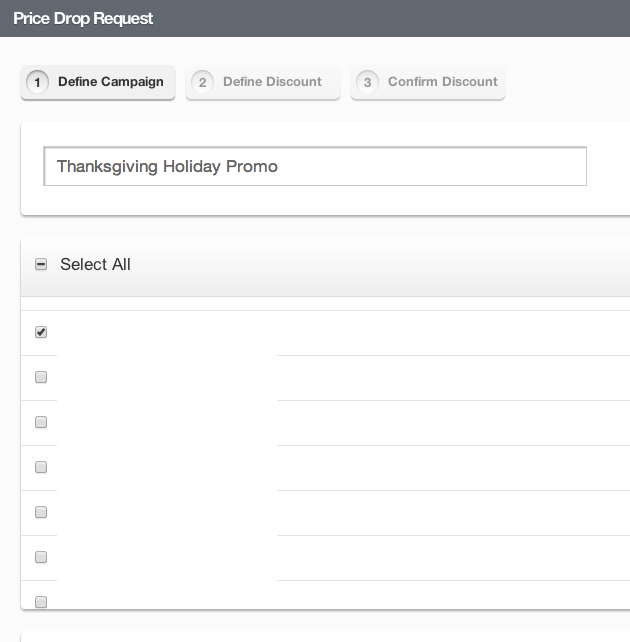 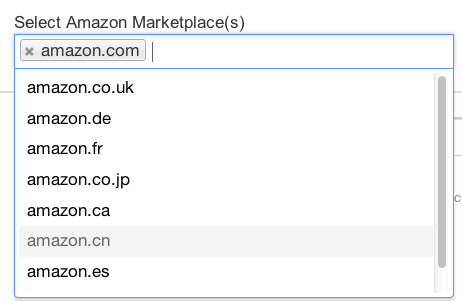