How TapBlaze, Developers of "Good Pizza, Great Pizza," Created Their Game and Optimized it for Amazon Devices : Appstore Blogs

How TapBlaze, Developers of "Good Pizza, Great Pizza," Created Their Game and Optimized it for Amazon Devices

Good Pizza, Great Pizza is a management game where players work at their own pizza parlor in a pizza-obsessed town. The pizza parlor across the road from you is your mortal enemy, always competing to get more sales. Each day consists of taking vague orders, figuring out what people mean, making pizzas, and then closing up shop.

Throughout Good Pizza, Great Pizza, you’ll meet a cast of different characters. Some will ask for a free pizza, others will give you riddles to make the pizza. When creating the delicious pie, it will cost you money as you place ingredients. At the end of the day, you are able to take your extra money and purchase upgrades, before watching the Pizza News Network, and starting another day.

I had the chance to interview Anthony Lai, one of the developers of Good Pizza, Great Pizza, about the game, bringing it to the Amazon Appstore and optimizing it for Amazon devices.

What made you want to make such a cute game about creating pizza?

“I love pizza, having grown up in New York City! With all the fond memories around pizza, I wanted to share my love of pizza with the world. Good Pizza, Great Pizza is actually the third pizza game we have created. The first game “My Pizza Shop” was a pure sandbox game, the player could make any pizza they liked. The second pizza game “My Pizza Shop 2” added challenges in the form of pizza orders that the player had to fulfill. Good Pizza, Great Pizza added story and characters to the two previous games to make a unique pizza cooking simulation game!”

The character design is a big part of the game - there are so many different unique characters that add a lot of charm to Good Pizza, Great Pizza. When creating all of these townsfolk, how did you come up with all these characters?

“Most of the townsfolk in the game were from the mind of the original artist that worked on Good Pizza, Great Pizza. He actually worked at a pizzeria for 4 years and many of the townsfolk were based on actual customers he interacted with.”

Which character was your favorite to create?

"The dancing pizza mascot was our favorite character to create. He is pretty different than the other characters in the game due to the giant pizza suit and we added several dance animations for him."

The “News Network” is a very unique feature to the game. What inspired the Pizza TV News Network?

What were some design challenges and struggles you had with making the game?

How did you bring your game onto the Amazon Appstore and Amazon Fire tablets? Did you need to change much in the code to make it work?

"Since the game was already on Google Play, we just had to do minor code changes (i.e. we added Amazon’s In-App Purchase SDK) to make it work for Amazon Appstore players.In regards to Amazon Fire tablets, we didn’t need to do any optimizing, the game worked right out of the box."

How difficult was it to submit your app to the Amazon Appstore via the Developer Portal?

“It was not difficult, we just had to resize some promotional screens.”

Do you have a user acquisition strategy that you ended up using?

“Our user acquisition strategy mainly consists of word of mouth from our players. We also focus heavily on community support via email, Facebook, Reddit and the app stores.”

Any performance metrics / Appstore audience insights that you’d be willing to share?

By the end of 2018, Good Pizza, Great Pizza had over five million monthly active users across all platforms (Amazon Appstore, Google Play, iOS) without any paid user acquisition.

Have you found that having in-app purchases is a good way to monetize Good Pizza, Great Pizza?

“Yes, in-app purchases have worked well for us and we are trying new ways to increase IAP conversions.” 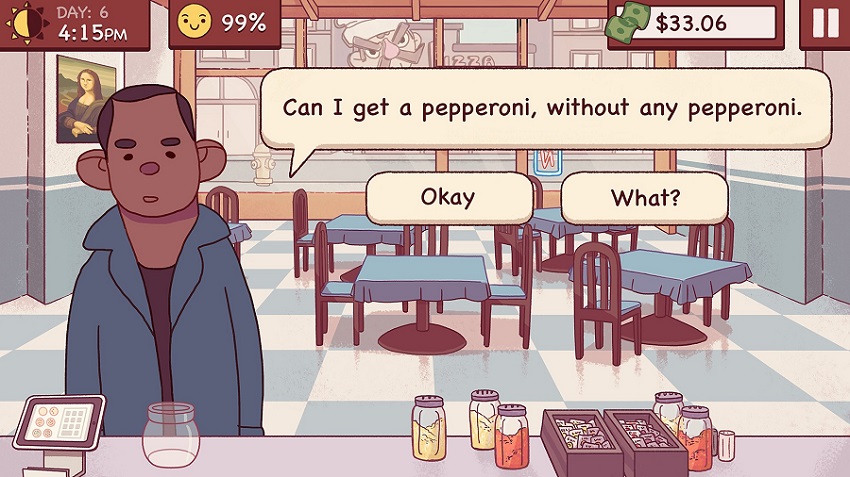 You can download Good Pizza, Great Pizza for free on Amazon Appstore here.

Read here for more information about submitting your app.