Sell Your HTML5 Web Apps In The Amazon Appstore

In August of last year we enabled HTML5 developers to publish hosted web apps next to native Android apps in the Amazon Appstore, making HTML5 web apps discoverable to millions of Amazon customers. Starting today, developers can set a list price for their web apps, giving them another way to monetize web content to Amazon Appstore customers in nearly 200 countries across the globe.

Prior to this update, web apps published to the Amazon Appstore were automatically set to free.  In the latest update developers can now set a list price in specific currencies based on the local markets they’re publishing their web apps to. This is great news for developers looking to publish their first web app to the Amazon Appstore, and the feature is now retroactive to all web apps that have already been published. That means existing developers simply need to log into their Developer Account to see an updated “Availability & Pricing” tab with the option to charge for the app.

Now with the ability to set a price for web apps in the Amazon Appstore, HTML5 developers can take part in our Free App of the Day (FAD) promotion. For developers not familiar with this program, qualifying apps gain greater exposure that could drive significant traffic to their apps. Opting into the FAD promotion and being selected enables us to work directly with the publisher to be featured in some of our most visible marketing placements. This includes placements on mobile devices, Kindle Fire, and the Amazon Gold Box Best Deals page, which are complemented by social media exposure including Facebook and Twitter announcements. These placements and the exposure they provide can drive significant traffic to the featured apps and allow the developers to grow their install base quickly.

To learn more about qualifying for the Free App of the Day program, check out this post on how to get approved, and make sure you opt to have your web app considered for the program during the app submission process.

To republish an existing app as paid, simply edit the ‘Availability & Pricing’ tab and enter a list price, which is already defaulted to free. The same list price changes can also be made to any submission set to “IN PROGRESS” that is waiting to be approved for release. 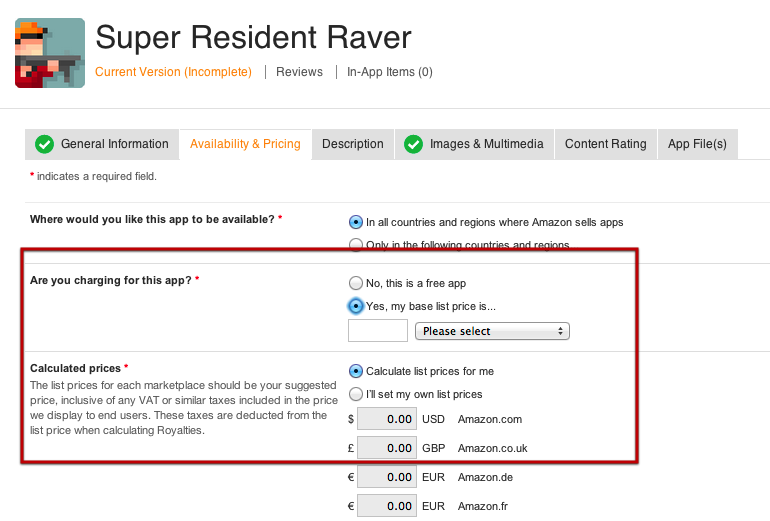 This is just one new feature we’ve added to help make publishing HTML5 Web Apps to the Kindle Fire best in class. For more information, check out the HTML5 Web Apps detail page