Why Isn’t Your Game Doing Better?

Article 1 of 10 in the series: What the Top 50 Games do with In-App Purchasing that the Rest of Us Don’t

Why Do A Study At All?

This whole study of ‘the top 50 vs. the rest of us’ started because we were curious as to why some great games didn’t make a lot of money with IAP while other good games were making more. Sometimes a lot more. We do, after all, run an Appstore with millions of customers in over 200 countries and territories, so finding out how to improve our developer’s IAP returns is a pretty big deal for us.

In our search for an answer, we took a look at how the top 50 apps did with IAP and compared those results with similar apps that were not in the top 50. Then, we proceeded to dive deeper to find out what the top 50 did in common that the rest of us weren’t doing (hence the title for the blog series). We found some pretty interesting data and observations to match, and we’ll share all of that with you in this series.

The first thing I’d like to share is how the top 50 did differently. We’ll take a look at the numbers and see what it means to be top 50 versus what it means to be the rest of us. The second thing I’d like to share is what they do differently. What did the top 50 do differently than the rest of us to get those results.  Along the way we will share things that you can start implementing now, so that you can try to get results that are a lot closer to the results that the top 50 get.

For the first step, we wanted to find out how they did differently. That is what does a top 50 app look like when compared to the rest of us in terms of retention and usage.  To study that, we did a cohort analysis. That’s a fancy way of saying we took 100 users for each of the top-50 apps and the other apps, and compared the groups against each other. Here’s what we found while walking through the first day the users downloaded their apps: 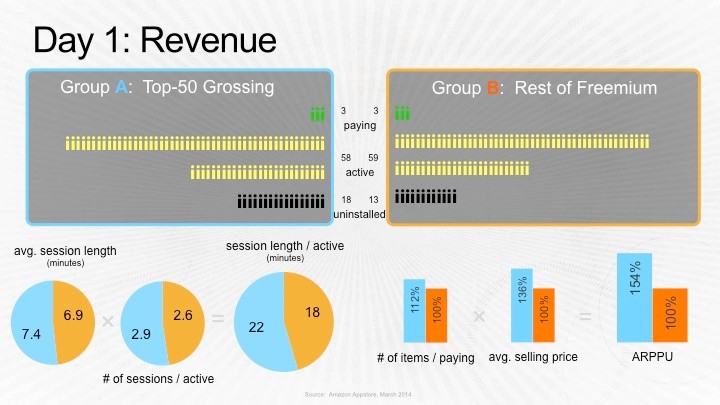 What’s surprising is how many people don’t actually launch the app after they download it.  So we have just a little bit over 50% of the downloads becoming active users. And as you might imagine, if you’ve downloaded the app but haven’t launched it, you will likely uninstall that app.

Be that as it may, what we really want to look at is how many users became paying users.  On the Amazon Appstore about 3% of the total downloads eventually become paying users.  I’ll refer to the active user chart at the top of the slide as Retention data. But that’s not all the data we chose to look at.

How Users Spend Time in the Apps

Look at the pie charts and bar charts below the retention data.

It’s important to know how much time users are spending in your app, because ultimately it will impact how much they spend in your app.

How Users Spend Money in the Apps

How users spent money in the apps is what we looked at next. We took the apps from the rest of us and we normalize their earnings at 100% so we could see how the top 50 did in relation to how the rest of us did.

But this is just the beginning. In the next article in the series, we’ll take a look at this data moving out a bit farther in time.

Check out the Amazon Appstore and the In App Purchasing API here.