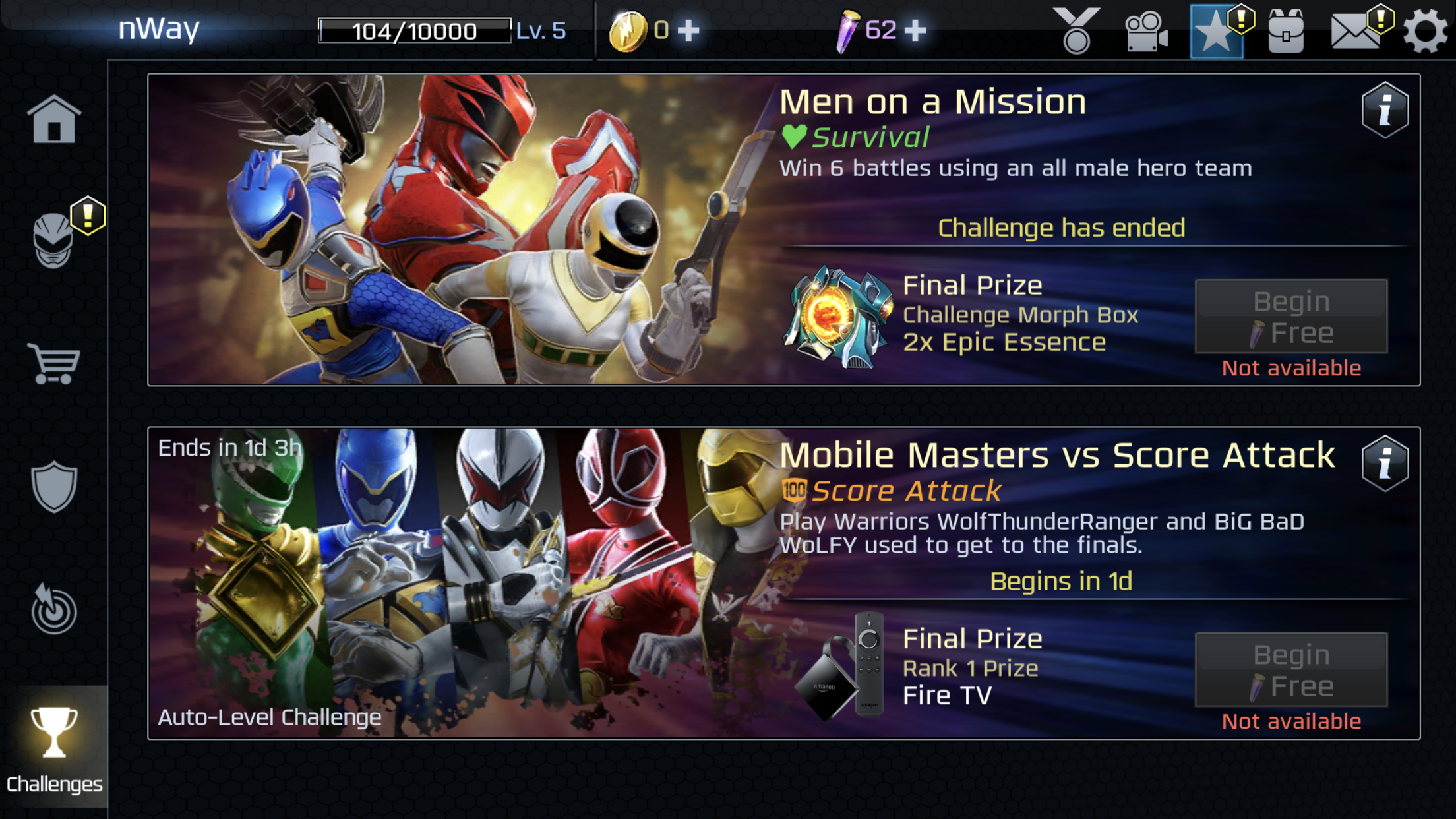 Competition provides the opportunity to bring players together and create vibrant communities around the game itself, as well as the characters and IP. It offers a quality and native way to engage fans, extending the brand story.

Power Rangers: Legacy Wars, by nWay, took their competitions one step further with GameOn, which enables cross-platform competitions and offers real-world prizes to the top players. These physical prizes bring the Power Rangers story to life and motivate players to continue playing for a chance to win.

We had a chance to talk to Jesse Cherry, the senior product manager at nWay, about nWay's experience running competitions and engaging their players with GameOn.

Here are three things we can learn from nWay:

Power Rangers: Legacy Wars participated in the weekend-long esports tournament, Mobile Masters, in June 2018. They used two different tournament types, leaderboards and brackets, to crown the ultimate winner. nWay first ran qualifiers, using leaderboards, to identify the best players from around the world to ultimately compete in Mobile Masters. There were four qualifying rounds in three different regions, where players competed for the top spots on the leaderboard. At the end of the qualifiers, the top 28 people moved on to the group stage.

The group stage featured brackets, where the 28 finalists competed against each other and at the end of each round, the top players advanced to the next round. The final eight players from the group stage won their way to Seattle to compete in the Mobile Masters tournament, which also used a bracket-style tournament to identify the champion.

This combination of leaderboards and brackets is an efficient way to run qualifiers and finals for an esports event. Leaderboards for the qualifiers allow everyone to participate and have a chance to advance, whereas brackets make the finals a more exciting, energetic way to watch players compete for the top spot.

2. Offer real-world prizes to bring the IP to life

Once you pick the best tournament style for your game, it's time to think about how to reward the top finishers. Thanks to GameOn, nWay was able to rally their fans around the Power Rangers IP, awarding real-world prizes delivered right to a player's doorstep.

“Being an IP-driven game, we were really interested in real-world prizes because it gives us another avenue to live and breathe the IP,” said Jesse. “We have the ability to send stuff directly to players' homes that relate to Power Rangers and continued that story.

“When offering real-world prizes, there is more of a furor in the game. The moment a player has been eliminated, they want to jump back in and play for another chance to win.”

In addition to Power Rangers merchandise, nWay also offers physical prizing from sponsors. For example, their players were sponsored by Razer during Mobile Masters. nWay gave away Razer phones to the winners, allowing them to show off the sponsorship in a way that was engaging and appealing to players.

The best prizes in the world won't be effective unless your players know about them. It's important to clearly communicate the rules and tournament details (including prizing!) to players. Make sure to set clear expectations of what players will be doing, what they will win, and how they can win.

In the example below, nWay capitalized on the most-viewed real estate in their app to promote their tournaments, thanks to a specific “Challenges” section of the navigation. Once you click on “Challenges,” you see each tournament listed with instructions on how to play. Most importantly, these guidelines clearly outline everything a player would need to know to begin: when the tournament starts, what they need to accomplish, and details about the prize.

GameOn makes it easy to run cross-platform tournaments and award players with real-world prizes fulfilled by Amazon. It provides a ready-made solution for enabling competitions in your games, rather than having to build them from scratch.

“GameOn works really well, especially if you want to tie in those real-world prizes. You can get all that stuff set up really quickly with GameOn,” said Jesse.

You can get started with GameOn in three easy steps: