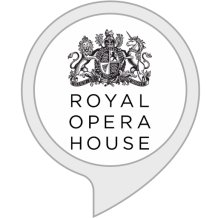 One of the Royal Opera House’s primary goals is to enable seamless interactions with its existing customers while making it easy for new customers to discover its offerings.

“With the large number of Alexa devices sold globally, we saw a real opportunity to get into customers’ homes in a new way,” says Tom Nelson, Head of Audience Labs at the Royal Opera House.

A Whole New Form of Interaction for Customers

The skill delivers responses for what’s on today, tomorrow, and next week. Results include information for any opera and ballet performances on the company’s stages as well as information for performances from guest companies visiting seasonally. To delight users, the skill also gives listeners a sample of the opera experience by playing music when the skill opens.

“When you’re designing for the web, you want a user to be able to get the information they need with as few clicks as possible,” says Nicola Pietroluongo, Lead Developer at the Royal Opera House. “With voice, you want to deliver short, informative responses while keeping the user engaged and prompt them again when needed.”

Creating a Skill in Less Than Three Days

An impressive one-man project, it took Pietroluongo less than three days to develop the skill in both US and UK English.

“The Alexa Skill Kit is set up well for developers, and makes the code quick and easy to spin up. That, along with the Alexa Developer Forums full of community support made it possible for me to create a skill from scratch very quickly,” says Pietroluongo.

As part of the development process, Pietroluongo had to convert a wide range of words that indicate dates like “next week” or “July” into a date format that could be used for search.

Additionally, for show information, the skill leans on Tessitura, a CRM platform and database for arts, cultural, and entertainment organizations. Pietroluongo needed to link the skill to the Tessitura system to pull live data without affecting performance or security. To query the Tessitura APIs and retrieve the Royal Opera House performance information, Pietroluongo used Amazon API Gateway as a bridge between the Alexa skill and Tessitura.

The skill is hosted on AWS Lambda, which enables the Royal Opera House to automatically scale and reduces the likelihood of performance issues.

“We followed the Alexa Skills Kit guide for testing and evaluating the skill to make sure we were designing it for the best customer experience,” says Nelson.

So far, the Royal Opera House has received “universally positive” feedback for its skill, says Nelson, and the team is excited to continue updating the skill.

“We are absolutely committed to this skill and plan to include ticket availability, performance synopses, and performer details in the near future,” says Nelson.

Nelson says when it comes to innovating with Alexa, the team is just getting started.

“We see voice-first experiences becoming integral to nearly every business over the next decade. People are embracing Alexa, and it’s such a great way for brands to communicate with their customers,” says Nelson.

Build a Skill, Get a Free Echo Dot and More

We’d like to help you bring your big idea to life with Alexa. Publish a custom skill in August, and we’ll send you a free Echo Dot so you can experiment and daydream. You can also earn limited-edition Alexa developer socks. Learn more about our promotion, and start building with the Alexa Skills Kit today.