Beyond Security, Alarm.com and Alexa Let You Speak to Your Whole Smart Home : Alexa Blogs

Beyond Security, Alarm.com and Alexa Let You Speak to Your Whole Smart Home 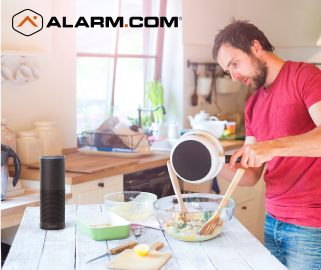 l. That wrapped up almost three months of development and internal and beta testing. All that testing led to a smooth certification process.

The company's founders recognized the limitations of traditional landline-based alarm systems. Besides relying on phone wires—which can be tampered with and unreliable —customers often forgot to arm their systems. The company saw a unique opportunity to allow customers to arm and disarm the system and know what’s happening at their home from anywhere.

Alarm.com enhanced its offering with its first mobile app. At the same time, it started expanding its core platform beyond security into home automation and video. Today over two million Alarm.com customers control their smart home devices from their phones, tablets, TV, and more.

Voice control: The next evolution in Alarm.com’s smart home ecosystem

When Amazon Echo and Alexa debuted, Alarm.com saw another huge opportunity. With the launch of the Alexa Skills Kit (ASK), the company knew voice technology’s time had come. “We had voice technology on our radar,” Davenport says. “Voice control is a compelling way for customers to interact with their devices from within their homes.”

The software team didn’t start developing a custom Alexa skill right away. Instead, Roberts started his own early exploration and prototype during the ASK beta. When the integration project got the green light, he was ready.

Roberts said using the ASK API was straightforward. He found mapping the API responses to Alarm.com’s existing web services was the simplest part of the project. As for the rest, he recalls the major components:

The team members brainstormed all the ways they thought users would request a command. Like many developers new to voice applications, they found customers don’t always say what you expect.

So they took a unique approach. Davenport gave the prototype to various users without instructions on what to say. She asked users to “take this home” and try to voice-control their systems. She asked the users to record what commands didn’t work, then the team incorporated the missing commands. “It was different from our typical testing process where we tell them do these five commands and make sure they work,” said Davenport. “It was more open-ended testing. It accommodated the fact that different people have different styles of communication.”

When they submitted the skill to the Amazon Test Lab, the team felt confident it was ready for the real world.  “Alarm.com is a life safety platform," says Davenport. "We have millions of homes and business customers relying on us for their protection. You can imagine our internal testing was quite rigorous, before we even began the Amazon certification process.”

What’s next for Alexa and Alarm.com?

Alarm.com is always expanding its platform with new devices and integrations to benefit its customers. As it does so, it will incorporate voice where it makes the most sense. For example, it is looking into also supporting some of its devices via the new Smart Home Skill API.

Another example is how to use “scenes” like Home, Away, Sleep and Wake. These could activate a series of commands to multiple Alarm.com-connected devices. Just by saying “I’m going to sleep,” you could lock the doors, adjust the thermostat, turn off your lights, and check the garage door. Oh yes… and arm your security system.

“We're excited about voice control because it brings a new context and another point of engagement with our platform. With Alexa, users can literally talk to their home. That builds on Alarm.com’s philosophy that the home can be highly intelligent and take action on your behalf.”