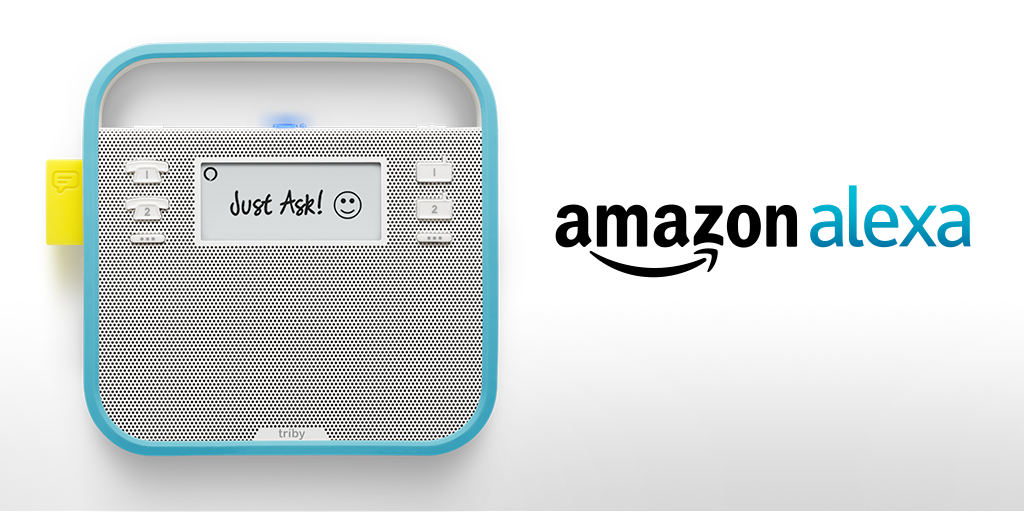 When Sébastien de la Bastie, Managing Director at Invoxia, walked the exposition floor at CES 2015, he knew his company had a hit on its hands. That’s when the French technology start-up previewed Triby—a new smart speaker for the kitchen.

Triby is a portable yet connected device for your smart home. Triby’s integration of AVS gives it voice control over a growing world of digital devices and services. It’s an incredible wireless music system for Spotify, FM and internet radio, and Bluetooth streaming. And it’s also a family’s home communications hub. Triby provides a connected message board, free internet calls and conference-quality, hands-free mobile calls. It also has an e-paper screen to display digital sticky notes and other information.

Paul Bernard, Director, Corporate Development and Head of the Alexa Fund, also saw the CES demo and was impressed with Invoxia’s vision for reinventing home communications with the Triby. He saw the device  as an ideal candidate for Alexa Voice Service (AVS) integration. Soon afterward, Amazon approached de la Bastie about adding new capabilities to his device.

With AVS, Triby would have access to the world of voice-enabled services offered by Amazon. “Amazon had the idea of making Alexa available on non-Amazon devices,” said de la Bastie. They spotted us because we had developed innovative technology for far-field voice capture. That’s important for any device sending acoustic data to Alexa.”

In late 2015, Amazon’s Alexa Fund made Invoxia its first AVS-related investment, showing its support for the company’s vision of bringing voice to Triby. Thus began a strong, collaborative partnership to create the first non-Amazon, Alexa-enabled device. The new Triby debuted in April 2016.

Before starting the integration with AVS, Invoxia had work to do on the Triby itself, starting with detection of the wake word.

To summon Alexa, Amazon Echo users need only say her name: “Alexa.” Invoxia had its own hardware solution for Triby’s voice detection, but de la Bastie said they modified it to also work with the Alexa wake word. This mostly required training the device to recognize and respond to the word.

“To generate a good audio signature for Alexa’s wake word, we used plenty of recordings with different voices and accents. We also tested with false signals and background noises to get it just right,” de la Bastie said.

Next, de la Bastie wanted to transmit only the highest quality audio to AVS, which he says requires more than just filtering background noise. Triby uses an array of four microphones to recognize commands from up to 15 feet away, but that comes with an acoustical price. Ninety percent of the sound waves reaching each microphone are indirect, having bounced off walls, ceilings and other objects.

The human brain can “rebuild” a clean acoustic signal, despite the noise, echoes and interference found in even the busiest households, but de la Bastie says he wanted to dampen that “noise” before sending anything to AVS, thus ensuring the user experience. “We’ve created some pretty sophisticated algorithms for Triby—echo cancellation, beam forming, attenuation and more. We do a lot of audio pre-processing to guarantee Triby sends Alexa the clearest audio possible.”

The final piece was integrating with AVS itself, a collaboration both Invoxia and AVS teams agree was as gratifying as it was successful. This involved the Amazon login, individual device identification, security tokens, and data transmission and receipt—all done via the AVS web interface. This was straightforward, and according to de la Bastie, it was a natural fit for Triby.

“There is a significant amount of signaling between the Triby devices, the Triby hosting platform and the AVS, but both Triby and AVS are in the cloud and controlled via web services. It was just a matter of following the new AVS protocols, then working closely with Amazon on the certification.”

Invoxia was one of the first third parties to go through the testing, refinement and certification process with AVS. The strong partnership between the teams ensured both companies reached their goals— to bring voice to Triby while introducing the first non-Amazon, Alexa-enabled device.

Invoxia has seen a healthy jump in Triby sales since it released the Alexa-enabled Triby. With what they’ve learned, de la Bastie says they are looking forward to more AVS-based products. He says AVS makes Triby an even “smarter” product, extending its reach with new services and content. What’s more, integrating with AVS has increased Invoxia's visibility, especially in the US.

“It was a great adventure, a lot of fun and a lot of surprises. It was the first time for the AVS team as well, making Alexa a service opened up to the world.”

In the future, de la Bastie says the more we use devices and services like Alexa, the smarter they will become. He expects voice-enabled authentication to become a sort of biometric signature and he thinks it is inevitable services like AVS will add metadata to their payloads. “Devices like Triby will use metadata to display non-audio information, or to perform some other operation specific to the particular device. I think that’s an important next step for AVS.”

He invites other Alexa developers to send questions about Invoxia’s experience to developer@invoxia.com.

If you are a device maker, service provider, or application developer interested in adding rich and intuitive experiences to your products – AVS is the right choice for you! Get Started

For more information on Alexa-enabled devices and getting started with Alexa, check out the following resources:

Have Questions? We are here to help! Visit us on the AVS Forum to discuss specific questions with one of our experts.