Article 2 of 10 in the series: What the Top 50 Games do with In App Purchasing that the Rest of Us Don’t

In the previous article in this series, we took a look at how we built the cohort study we’re sharing in the series, and described what day 1 looks like in terms of retention, usage minutes, usage sessions, and IAP transactions. This article looks at the rest of the first week. 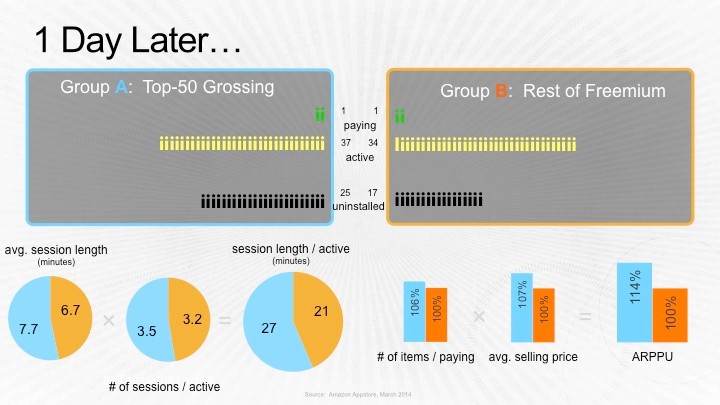 When we last left our study participants, retention data was statistically equal, and the top 50 had an edge in usage and ARPPU. A day later we still have about equal user retention data (represented in the top part of the illustration above). Notice in the time data (the pie charts on the bottom), that the top 50 still have advantage in minutes per session and number of sessions per day. Over the month, you’ll see Total Session Length go between a 40% advantage up to an almost 60% advantage for the top 50 apps. In terms of Items sold per paying user, the top 50s advantage will stay in the single digits and won’t really move around all that much over the month.

Not so with the average selling price.  On day 2, the advantage the top 50 have in average selling price has closed a bit, but it’s not because the top 50 did anything wrong. The gap has narrowed because the rest of us started selling more things for higher prices. As a result the margin of average revenue per paying user shrank to only 14%. But this doesn’t last long. 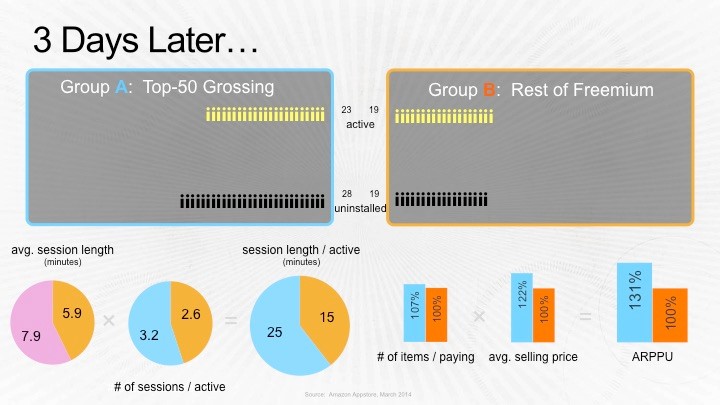 On day three, the retention data is still roughly equal, and the session time gains favor the top 50. But the top 50 have made some gains on average selling price. Like the day before, this is not because one group is making a big mistake, it’s because the Top 50 are moving higher-priced items in their IAP catalogs, and they are starting to differentiate offers to different groups of users. 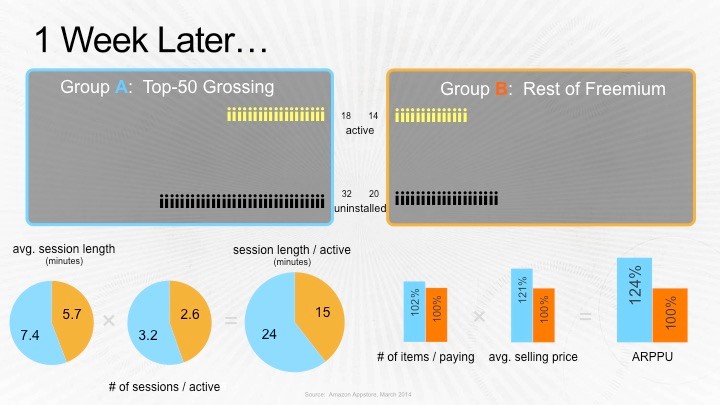 A week later, we start seeing some of the difference in retention data becoming significant. There is now roughly a 25% active user advantage to being in the top 50. As far as time in the app is concerned, we are moving a lot closer to a 60% advantage in total minutes spent for the top apps. Regarding revenue, we see a 24% difference in average revenue per paying user. No doubt this is a tipping point for our study participants. Check out how they fare moving forward.

In the next article in the series, things start to change dramatically, and we see what it looks like to be top 50 in the long run.