As we continue this multi-part series on how to make your first game for the Amazon Appstore we’ll dig into the fundamentals of game design. If you are just finding this post, make sure you check out part one which covers picking a game framework that supports exporting to the Amazon Appstore.

For most people, it usually starts the same exact way. You have a game idea and just want to start building. Making a game is more than just having a good idea and the skill to code it; you have to think through the gameplay, the target audience, and map out what it is you are going to build.  I love this tweet by Sean James McKenzie of @baconandgames about your first game idea: 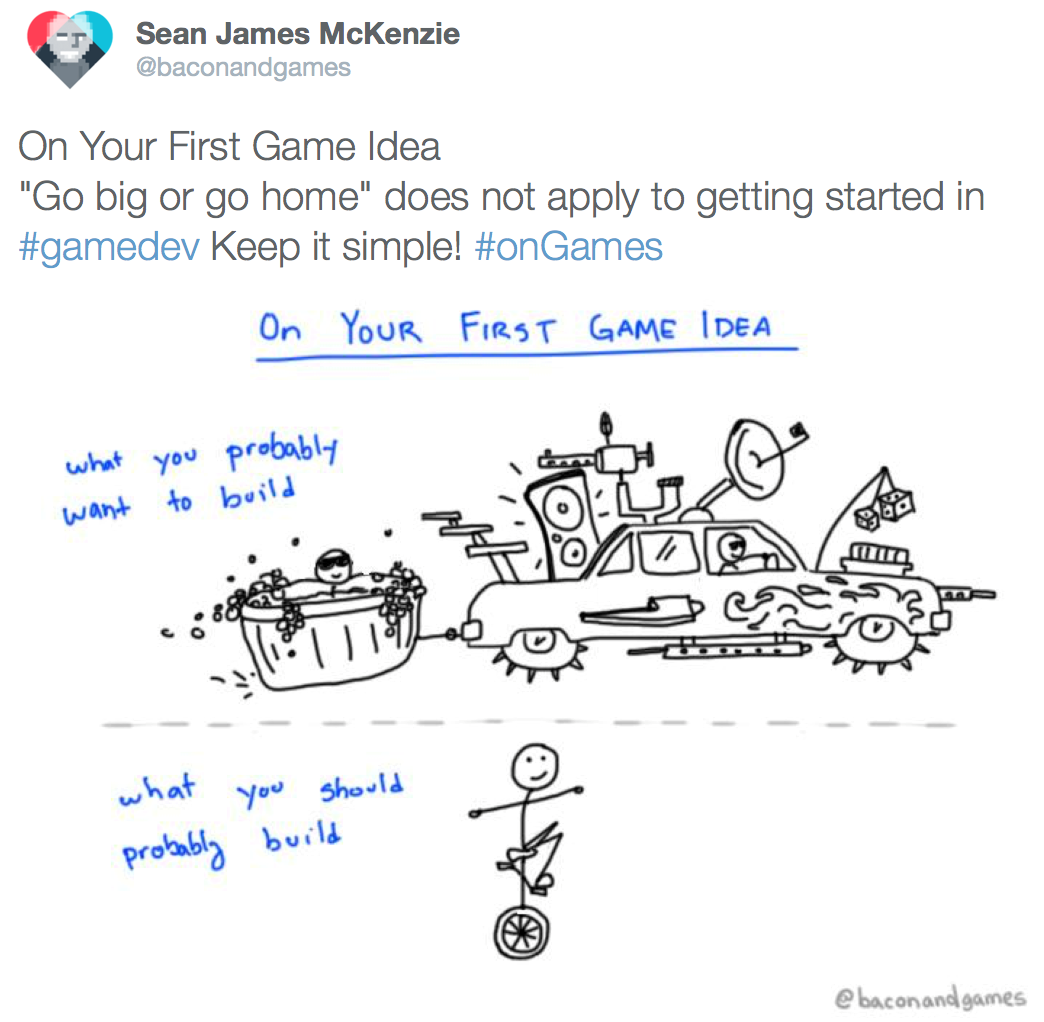 To help you simplify your idea to something manageable you should start by getting it down on paper. No one builds a house without a blueprint, and you shouldn’t make a game without a solid plan either. This could be something as simple as a task list with everything you need to do or something more specific, such as a document outlining all the details. Either way, your game design process is going to start with a blank page. Let’s talk about how to fill it in.

In traditional game development, you are encouraged to make a game design document. This is usually a large document outlining every aspect of a game. It’s the blueprint that the rest of the team must follow when building out the game. If you are a single developer, this is overkill. You can easily boil down a GDD into a single list of tasks with a few introduction paragraphs and any collateral or references, such as screen shots and links to other games or game mechanics you like.

It’s up to you to find the best way to document your idea, but the more you work through the details the better the project will end up. It’s very “cheap” to work out your ideas on paper or in your head before you start coding. Once you begin the coding process and need to go back, you amass what we call technical debt that can make your code unmanageable or, even worse, kill your productivity altogether by forcing you to constantly hack together new solutions or refactor code you’ve already written.

If you are having trouble getting started I highly suggest checking out the 1 Page GDD by Javi Cepa (@JaviCepa).

The most important part of this documentation process is sharing your idea with others and getting their feedback. I know you want to protect your idea with your life, but the reality is that most people starting out making games need feedback from others. We all start out with the lofty goal of “making a game I want to play,” but the reality is that you are just one person and, in order to be successful, you need to appeal to larger markets. I’m not saying you should post your game ideas online for all to see, but find a select group of trusted friends and run it by them. You’ll find that some feedback is hard to take, but being able to filter out what will actually make your game better is a valuable skill to have.

Perhaps the most important thing outside of documenting your own ideas is to start playing games … a lot of games. As a game maker, your hobby should be playing games, taking them apart, and figuring out what makes them tick. You should keep a notebook of all the games that you play, and even the ones you don’t play but see online. Use something like OneNote, or any note-taking app. The idea is to write down what you like about the game, what you don’t like, and some of your big takeaways from playing it. There should be screen shots if you like the art style and links to any collateral information on the game that will help you with your own ideas later. Since you never know how a game will inspire you, it’s important to be as detailed as you can. It sounds like a lot of work, but it’s honestly the most valuable tool you will ever have when it comes to finding inspiration and avoiding common pitfalls.

Once you have mastered these three steps for writing down your ideas, vetting them out and finding new inspiration you will be on your way to making your own game. To help get you started, here are a few games I suggest trying out on the Amazon Appstore which inspire me:

Ready to Submit Your Game?