Note: Effective 08-26-2015 Free App of the Day (FAD) has been replaced with Amazon Underground.

Fire Maple Games is a mobile app developer located in Garnet Valley, PA. Their adventure game app, The Secret of Grisly Manor, continues to be a best-selling title since the launch of the Amazon Appstore for Android in March 2011. The sharp graphics and engaging storyline of this hidden object game continue to amass downloads and excellent reviews.

Fire Maple Games has taken advantage of many Amazon Appstore offerings including the Free App of the Day promotion. The Free App of the Day program has offered customers a paid app, for free, every day since the launch of the store. Additional, Fire Maple Games capitalized on app placement throughout the store and targeted e-mail campaigns. They also optimized their application for the Kindle Fire. By leveraging the Amazon Appstore platform, downloads of The Secret of Grisly Manor have seen significant gains on a weekly basis.

Initially engaged by the Free App of the Day promotion out of pure curiosity—what does and does not work when selling apps?—Fire Maple Games was pleased with the level of exposure they got from participating. “It was a fantastic increase of our user base,” said Joe Kauffman, owner of Fire Maple Games. “It wasn’t directly profitable, of course, as we were giving the game away for free, but now many more people have been exposed to the company and our games.” Kauffman has gotten many e-mails from people saying they would definitely buy the company’s next game. “For an indie developer on a limited budget, it was a great way to get the game into lots of people's hands,” he added.

Fire Maple Games joined the Amazon Appstore in November 2010 and was part of the Amazon Appstore launch four months later. “Amazon is such a great brand with such a powerful presence…we had high hopes for the Amazon Appstore for Android,” Kauffman said. They were also intrigued by the approval process and liked “that the apps would be curated, so a nicer selection of apps could be promoted.” 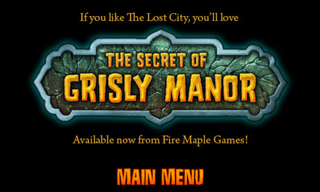 Fire Maple Games recently added a second adventure game, The Lost City, to their Amazon Appstore catalog, and the app has been getting stellar reviews. With the traction Fire Maple Games has seen thus far, new titles are sure to be a hit. “We use previous games to cross-sell new games,” Kauffman explained. “It seems to be working pretty well…both games have stayed within the Top 25!”

Kauffman revealed that the company hasn’t gotten any specific emails from customers regarding their experience with the Amazon Appstore and that that is a good thing: “It means that the process is pretty seamless. I recommend that everyone partner with Amazon! It is a nice, curated app-store with a great customer experience.”