Granted, the voice integration doesn't extend further than this. For example, users can't search and discover your app's media with voice, saying “Alexa, find [TV Show]” from the home screen to find the content — that integration requires you to implement the Video Skills Kit. However, allowing users to interact with transport controls alone is a huge win and constitutes a significant use case for voice. (Think about how much time users spend watching a show versus the time they spend getting to the show.)

The release of Fire TV Cube provides a significant milestone with voice because it's the first Fire TV device to offer far-field voice control natively. This means users can say utterances far away from the device's microphone and it understands you. (“Near-field” control refers to saying utterances while pressing the microphone button on your remote, with your voice near the remote's microphone.)

Far-field voice control is simply cool. I've personally found it convenient to say “Alexa, pause” while I'm watching a show so that I can go into the kitchen and stir what I'm cooking, and then “Alexa, resume” when I return. Or when one of my kids gets really loud and I can't hear what people are saying on the TV, I can say “Alexa, rewind 30 seconds.” 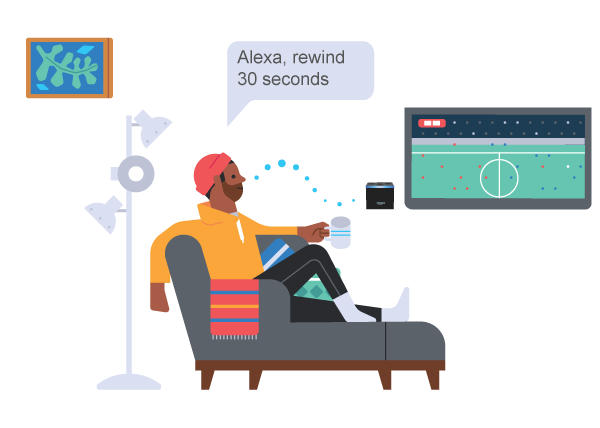 Sure, you could do all this using your remote, but for these simple utterances, it's much easier to say them rather than hunt around for the remote. Especially considering how we often watch TV in the evenings with the lights dimmed — finding that little black remote can be annoying.

Fire App Builder now gives you an extremely easy way to incorporate this voice-forward functionality into your apps. If you're using Fire App Builder, you don't need to do anything at all (except upgrade to the latest version). The Media Session API is already integrated, so it just works.

To try out the voice commands, download and build the latest version of Fire App Builder in Android and run the sample app on a Fire TV device. Launch a video and try out some of these Alexa commands:

If your Fire TV device has only near-field voice control (requiring you to press a microphone button on your remote), you won't experience the full experience of hands-free TV. I suggest that you try out the Fire TV Cube or link an Echo or Echo Dot with your Fire TV to provide the far-field voice control. There's quite a difference between hands-free control and pressing a microphone button. Hands-free TV simply frees you up in more liberating ways.

If you're new to Fire App Builder, you can learn more about it here. Fire App Builder is a Java-based Android project that lets you build a robust Fire TV app (which will also work in Google Play) with little development effort on your part. The idea of Fire App Builder is to provide a complete streaming media app with all the functionality you could want — from authentication to advertising, analytics and in-app purchasing and more — all configurable to your needs.

Fire App Builder sits between the no-code solution like Amazon Creator and a custom-developed Android app. You don’t need Android development skills to build an app, but you can jump into the code to extend it if you want. Even if you have development skills and the ability to roll your own, you might prefer to start with a robust framework to save time. Fire App Builder helps you get a rich TV app optimized with voice-interactivity for transport controls with comparatively little effort.

To learn more about Fire App Builder, see the following: