アクセスいただきありがとうございます。こちらのページは現在英語のみのご用意となっております。順次日本語化を進めてまいりますので、ご理解のほどよろしくお願いいたします。
What We Learned from 2016’s Top Apps and Games : Appstore Blogs

What We Learned from 2016’s Top Apps and Games

Today we share a blog written by our friends at App Annie on top 2016 trends and what lies ahead for 2017. Enjoy!

It’s been a record-setting year for mobile games and apps. In 2016, worldwide app downloads increased by 15 percent, according to App Annie. And the time spent in apps surged by 25 percent, reaching nearly 900 billion hours globally.

Apps are ingrained in the everyday lives of people all over the world. Nearly every industry — from banking to shopping, transportation to communication — saw significant increases in their mobile presence. (Check out App Annie’s 2016 Retrospective for more details.) 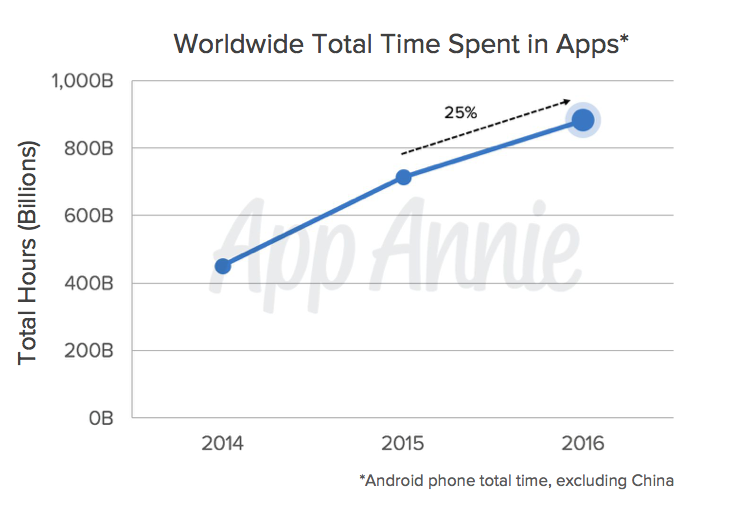 For app developers and publishers, a comprehensive mobile strategy is essential to ensuring success in the year ahead. Let’s take a closer look at the top trends from 2016 to gear up for what’s ahead.

Trend #1: US and China dominate the app marketplace

In the next five years, the US and China are expected to significantly widen their lead for combined in-app advertising and app store net revenue. Take a look at the compound annual growth rate (CAGR) in the mobile space to see the two countries’ continued explosion in revenue, across all mobile app stores. 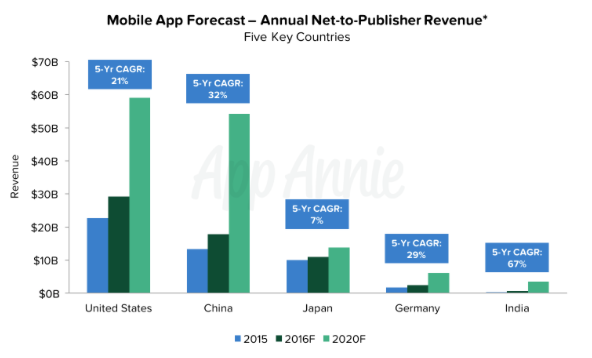 *App store and in-app advertising revenue estimates are net-to-publisher and inclusive of all mobile app stores, including third-party Android stores. This forecast does not include gross spend by advertisers and consumers.

Android leads worldwide downloads by a factor of 7:2 due to its dominant installed base. In the years ahead, China’s highly fragmented app store market will account for the vast majority of third-party Android’s revenue and growth.

Retail shopping and banking are now fully embracing the mobile as part of their omnichannel strategy. In 2016, market innovators began to shake up the marketplace as digital-first companies made impressive gains in these industries. 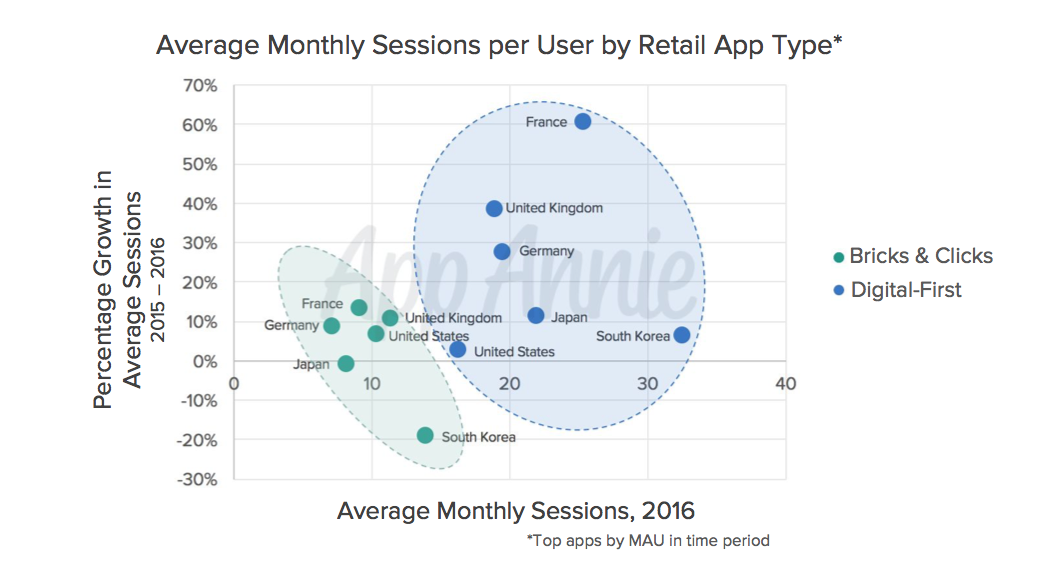 Bricks-and-clicks apps (from retailers with an extensive brick-and-mortar presence) saw far fewer monthly sessions and session growth than digital-first companies in the six countries analyzed by App Annie. The same story was true in the financial sector. Fintech apps (such as Paypal, Credit Karma and Venmo) saw higher average monthly active users in the US than all but four retail banking apps.

With digital-first upstarts reinventing the way people shop and bank, it is more important than ever for retailers and retail banking companies to engage consumers on mobile. While progress is already being made, there is plenty of room to improve in 2017.

Main takeaways for success in 2017

As consumers’ time becomes more immersed in mobile than ever before, making sure your app is primed for success is an essential part of any 2017 strategy. After looking at 2016’s trends, here are the key learnings:

As the world spends more and more time using apps, a comprehensive mobile strategy is more important than ever before.