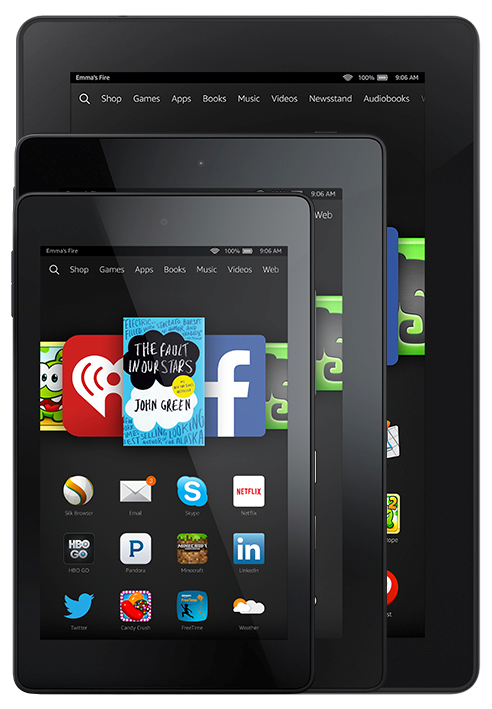 l give customers the power to watch, work, and play.  Aggressively priced, they are highly affordable and will appeal to a whole new customer segment by introducing a smaller, lighter 6” HD tablet form factor.

This release introduces hundreds of new upgrades and platform enhancements, including:

Fire OS 4 integrates our newest services including Prime Music, ASAP (Advanced Streaming and Prediction), and Kindle Unlimited. Second Screen headphone integration lets you watch Amazon Instant Video on a compatible big screen TV with headphones plugged into your tablet so you can enjoy the movie in enhanced Dolby Digital sound.

Fire tablets are built for the best in gaming with tilt, turn, and multi-touch controls. Customers get a new paid app for free everyday, and enjoy great discounts on popular games and apps. Plus, use Amazon Coins to purchase and save on apps, games, and in-app items. New Fire tablet owners in the US get 500 Amazon Coins—a $5 value.

Starting at $99, Fire tablets feature quad-core processors that more than double the speed and quadruple the graphics performance of previous models. Your apps launch faster and your customers enjoy a smoother and richer experience with better overall performance than ever before. Stunning HD displays and Dolby Audio make your apps and games shine. 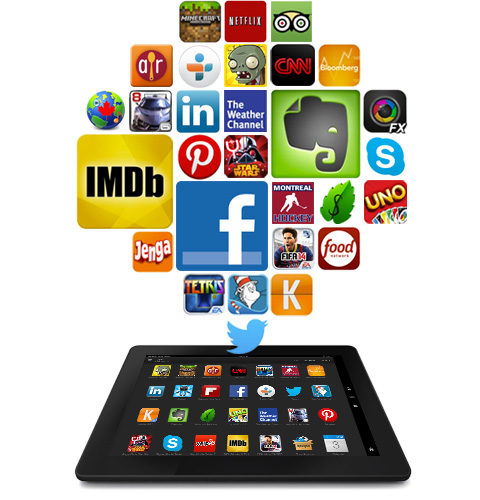 Fire OS 4 is available on the new Fire tablets, with some features coming to the 3rd generation Kindle Fire HDX and Kindle Fire HD (released in 2013) as part of free, over-the-air Fire OS updates starting later this year.

Fire OS 4 and the new Fire tablets are designed to provide fast and easy access to favorite books, songs, videos, and games. By deeply integrating software, content, and the Cloud, we build on Fire OS’s content-forward user interface to deliver innovative services that are available only from Amazon.

Fire OS is designed from the ground up to make it as easy and fast as possible for customers to access their favorite apps and content. The home screen Carousel and media libraries are automatically personalized to put your apps front and center in the app grid, providing easy, one-click access. 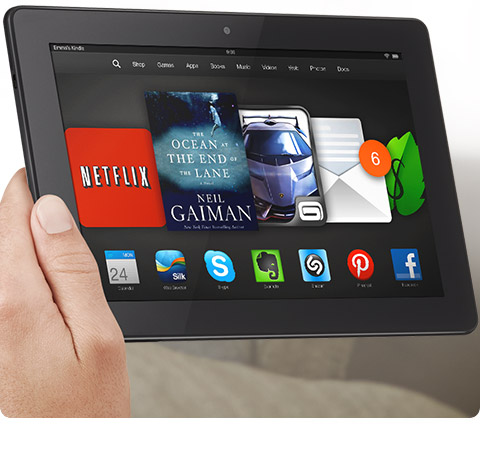 This means customers use your apps more, leading to more sessions, deeper engagement, and more opportunity to generate revenue. We expect these and many other features will make the new Fire tablets even more popular than their predecessors, further expanding the reach for your apps and games.

Reach a Global Audience for the Holidays

This year’s Fire tablets will be available to customers worldwide in the US, Canada, the UK, Germany, France, Italy, Spain, Japan, China, and Australia. The Amazon Appstore is also available on Android devices in 236 countries to give your apps even more reach. According to an Amazon-sponsored IDC survey, 76% of developers say that Fire helps them connect with new customer segments that may be difficult to find on other platforms.

Fire tablets expand that reach even further, and with perfect timing. The holiday season is almost here, and Amazon devices have historically surged during this period. According to Flurry Analytics, Christmas Day sees a particularly large number of device activations—24 times the typical number for any other day in 2013, for example—so now is the time to develop a new app or bring your existing Android or web app to Fire tablets, Fire TV, or Fire phone.

Fire tablets run Fire OS, which is based on Android 4.4 (KitKat) and offers complete support for API Level 19. This means that it is incredibly easy to bring your Android APK to Amazon devices. Most Android apps we’ve tested work on Fire tablets without modification, so you can publish your apps to the Amazon Appstore with little or no effort and expand your potential audience by millions.

Use the App Testing Service to check the compatibility of your existing Android app in as little as 90 seconds. It will identify potential issues and explain how to resolve them, and then make submitting your app a breeze.

Appstore Monetization Similar to (or Better) than Other Platforms

An IDC survey we commissioned found that developers make as much money per user (often more) when they sell their apps and games on Fire tablets, as compared to any other mobile platform. Playtika, for example, creator of highly immersive social games like Bingo Blitz, saw its highest average revenue per paying user (ARPU) on Fire tablets—70% higher than Android and 15% higher than iOS. Similarly, Crittermap saw superior results using the Amazon Mobile Ads API. Creators of BackCountry Navigator PRO, they earned higher eCPM than on other ad networks.

Fire tablets also support Amazon Mobile Ads, a cross-platform service to display banner, interstitial, and rich media ads inside your apps. You are paid for ad impressions, not just ad click-through events. Use it to monetize app sessions across Fire tablets, Fire phone, and all Android and iOS devices.

Amazon Mobile Ads is just one of many APIs available in Amazon’s Mobile App SDK, which also provides support for In-App Purchasing, A/B Testing, Maps, Login with Amazon, and GameCircle Achievements, Leaderboards, and Whispersync for Games. Build with our Mobile App SDK to get these services up and running quickly, and then use them to engage new customers, understand and improve their experience with your app, and increase revenue.

Learn more about Amazon’s monetization APIs on our website, where you will find Quick Start Guides and sample code to help you integrate them into your apps quickly.

The Amazon Appstore has never been available on a broader range of devices and platforms. It’s no wonder 65% of the surveyed developers also say that the Total Revenue achieved on the Kindle Fire is similar to, or even better than, what they experience with other major platforms.

The Amazon Appstore is preloaded on Kindle Fire tablets, Fire TV, and Fire phone devices.  And recently, we announced that Fire TV is available in the UK and Germany. Amazon Fire TV makes it easy for users to stream movies, TV shows, and music as well as download apps and play games right on the HDTVs they already own.

Back in April, we announced the expansion of the Amazon Appstore to 41 new countries, including Egypt, Indonesia, Singapore, and Turkey. Publishing your Android app on Amazon means you can reach customers from around the world, including those in countries that were previously inaccessible.

Now Is the Time to Submit Your Apps

Download our Mobile App SDK today to get started developing for Fire OS and Amazon’s entire device family. You can even test your existing Android apps with our App Testing Service to see how they will actually work on Fire tablets and Fire phone. As the Amazon ecosystem grows, so does your potential audience.