Thursday was our second full day at re:Invent 2014. It was great to talk about apps with so many developers – there are a lot of great ideas out there!

1. Everything You Need to Know about Building Apps for the Fire Phone

@theDaveDev walked through the new customer experience, all the new capabilities for developers, and how to test and submit Android apps .

2. Fire Phone: The Dynamic Perspective API, Under the Hood

@PeterDotGames spoke about Fire phone’s Dynamic Perspective and how developers can make use of real time head-tracking and 3D effects.

@peterdotgames "Devices are quite literally in your face so the UI should account for this reality" #reInvent pic.twitter.com/WaiRzWZfFk

Between these sessions, the monetization & Fire TV sessions on Wed and the hack-a-thon on Tues, it was an exciting and full event.  Beyond that, the AWS (Amazon Web Services) team also announced a lot of new capabilities and services – here’s the AWS recap. 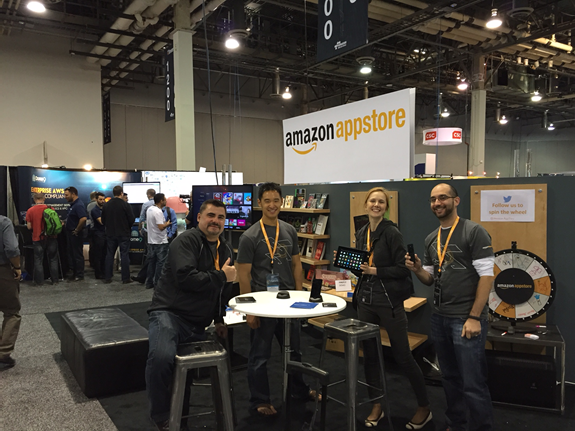 Once again, thanks to everyone that came by the booth to say hi.