Moe Tanabian, Software Development Manager, a2z Development Center Inc., an Amazon.com company, is our guest blogger for this post.  Moe recently presented on this topic during the Android Developers Conference (AnDevCon) in May.

One of the challenging issues of building mobile devices and applications is energy consumption management. In order to support users’ mobility, and their various uses of their devices, it is necessary to make light and reliable battery-powered devices with batteries that last longer.

Smartphones and tablets are getting faster, their screens are getting bigger and brighter, their CPUs run on faster clocks, and their daily usage time is getting longer as users use them for a wider variety of functions.

The advances in battery technology have been much slower than the evolution of device technologies and their usage patterns. In fact, most modern mobile devices are powered by battery technologies that are over a decade old. That is why most efforts to prolong battery life are focused on making hardware and software more power efficient.

Knowing about power consumption and the behavior of applications on mobile devices is fundamental in making batteries last longer. There are four factors that determine how much energy a mobile device, and by extension a mobile app, consumes: The battery, the device hardware, the software that runs on the device, and the user workload.

We know that batteries and battery technologies have been slow in getting more energy dense while most hardware is getting more power-hungry. Let’s look at how we can optimize software to lower power consumption and to adapt to user behavior and workload—from an app developer’s perspective.

Direct method: Ina direct method, a relevant use case is run on the device, and using a high sampling frequency logging power-meter, an amp-meter or a volt-meter the drawn power from battery is logged. These logs are analyzed later to determine how much power was consumed to complete the use case. Figure 1 shows how a mobile device is connected for direct power measurement. 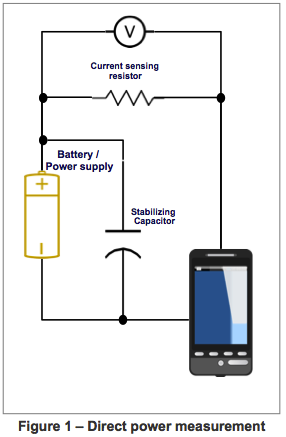 Indirect model based method: In an indirect or predictive mode based method, first we develop a power consumption model of the device based on its power consuming components. In atypical mobile device, these components include the CPU, the screen and screen illuminator, memory and flash, Wi-Fi, Bluetooth and cellular radios, GPS receiver, and available sensors on the device such as accelerometer and gyroscope as they are shown in Figure 2.

The total power that is consumed by a device (Pt) is the sum of the power consumed by the main components, plus a constant k. For the component i (for example the screen brightness) the drawn power can be modeled as the product of an associated system variable Ci, and the component’s coefficient Bi  for the time that the component is active, which is the test duration. This forms a regression estimation model that can be trained using training data observed from a direct method measurement for all components of interest.

Once the model is trained and k and Bi are determined, it can be used to estimate power consumed for a particular use case by simply plugging in the collected values of Ci from logs. 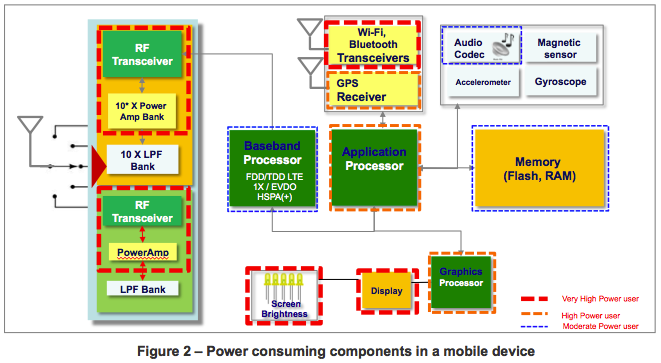 Logging and Instrumentation for Power Consumption

The best way to optimize for battery life is to identify the most offending areas in the software and optimize them first. What constitutes the most power-consuming features greatly depends on what features users use most,and this varies from user by user. Best battery life optimization mechanisms are the ones that recognize users’ usage patterns and adapt the optimizations accordingly. In this section I’ll introduce general practices that can improve power consumption in a mobile application.