If you’re considering building a media-based app for Fire TV, Amazon provides two frameworks to help you get started and accelerate your development: Web App Starter Kit for Fire TV (WASK) and Fire App Builder. In this post, we are going to take a high-level look at each of these frameworks, the particular skill sets they are built for and variations in their feature sets.  Let’s first take a look at WASK for Fire TV.

With WASK, you begin with a base app template that contains specific media functionality (for example, support for Media RSS or JSON feeds, or support for online video providers such as YouTube or Brightcove). Next, you customize the template by either changing the settings files or adding extended functionality by using standard web technologies (WASK currently supports JavaScript, HTML5, and CSS3 web technologies).

Baked into the WASK template is the code needed to build the big screen experience consumers expect, as well everything needed to pass Amazon Appstore testing that takes place during the app submission process. At the bare minimum, you need to provide the feed of media files that the app will use on Fire TV to display a selectable list of categories for consumers and a rotating carousel of media content.

Here’s a screenshot of a simple layout created with WASK:

After customizing or extending the basic WASK template, you can test your app using the Amazon Web App Tester. This is a free Fire TV tool used to test web apps on an actual device. The Amazon Web App Tester uses the same native app wrapper and web engine that will be used when the app is published, giving you an accurate preview of your app during development.

When you app is ready, submit it to the Amazon Appstore following these simple instructions:

Your published app will look indistinguishable from native apps on Fire TV. No native coding required.

Fire App Builder provides a Java-based framework that you can use to easily and quickly build streaming media Android apps for Amazon Fire TV. With Fire App Builder, you work in Android Studio, connecting to your Fire TV device through Android Debug Bridge (ADB), and generating an APK (Android Package Kit) file to upload to the Amazon Appstore.

Although Fire App Builder uses Android APIs (particularly the Leanback Library), you do much of the configuration and customization through JSON and XML files. Components of the Fire App Builder provide out-of-the-box functionality for analytics, ads, authorization, purchasing, and media players.

Fire App Builder minimizes dependence on Java expertise as much as possible, but for more deep-level integration, you can build on top of Fire App Builder. While no custom Java programming is required to create an engaging app, you can add your own custom Java classes to extend functionality through common interfaces and additional code.

You can also program your feed to require tokens for media protected by DRM. Support for YouTube-based feeds and other video hosting services is on the roadmap but not currently included.

You have control to adjust the colors, layout, typography, and more — all by simply editing XML or JSON files where these settings have been extracted. 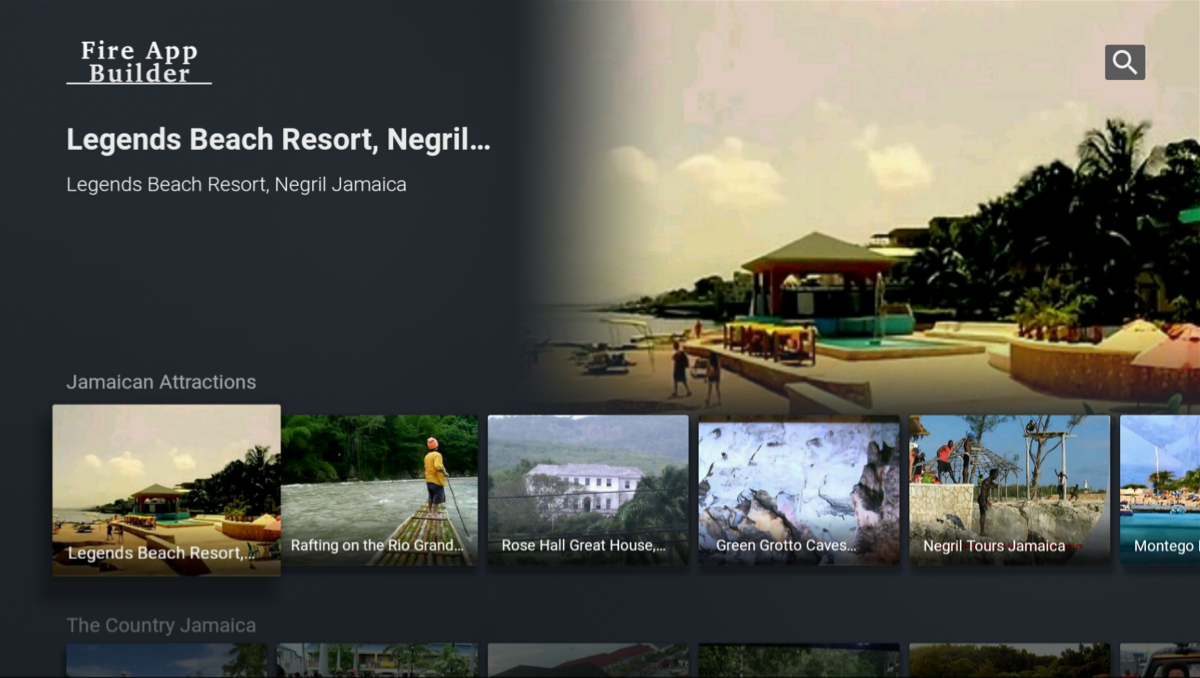 You submit your app following the same process listed above.

Both WASK and Fire App Builder come with a set of ready-to-go features. You can add the services and features you want into either framework. The code is open (and open source), and you’re free to enhance, extend, or otherwise build on top of the framework’s code.

Note: If a framework doesn’t have a feature, it doesn’t mean the framework won’t support it. It just means the feature isn’t already integrated in the code. Usually you can easily insert the third-party code needed to support these services.

To start building web apps for Fire TV using these frameworks, review the documentation on WASK for Fire TV or Fire App Builder.