Have you ever done a barrel roll in your browser, or tried to get walking directions to Mordor? Do you know the names of the UNSC’s two funniest marines? Is HESOYAM more than just a meaningless acronym to you, or UUDDLRLRBA a nostalgic link to your misspent youth? If you answered yes to any of these questions, congratulations! You have unlocked the Easter Egg Achievement of life.

Easter eggs in software, of course, are bits of unexpected behavior built in to a website, app, or game. They are usually activated by some undocumented command, but sometimes you just need sharp eyes to spot that special reference or inside joke. The term was probably first applied to a computer program in 1979, when Atari used it to describe secret credits released in the game Adventure. So, why do developers and customers love Easter eggs? How do they work? And, can you make money by using them?

Some Easter eggs are simply debugging tools left behind by forgetful programmers. The Konami Code, for example (above), originated this way. Others are used to convey a joke, cameo, or other content that might be unsanctioned or considered inappropriate. As a programmer, slipping something extra into production code—without getting caught—gives a little thrill and proves your l33t skilz.

The real reward for developers, though, is often just having created something unexpected or surprising, then looking forward with anticipation to how users will react when it is eventually discovered. For users, there is fun in the discovery of something few others have seen. Everyone likes to be in on a secret, and the harder it is to uncover, the more satisfying it is to be one of those in the know.

I remember the very first Easter egg I ever encountered, and the magical (yes, magical) effect it had on my young programmer’s mind. Technical docs for my Commodore 128 (successor to the Commodore 64) described RAM location 32800 as “storage for a highly encrypted political message,” or something to that effect. An esoteric BASIC command would unlock the secret message, however:

The result was modest, but I was amazed that the developers had gone to the trouble to include this code right in the ROM; it seemed so random, superfluous, and slightly against the rules.  Did Commodore even know about it? Why else make it so hard to find? It began a life-long interest in finding (and programming) Easter eggs in software. 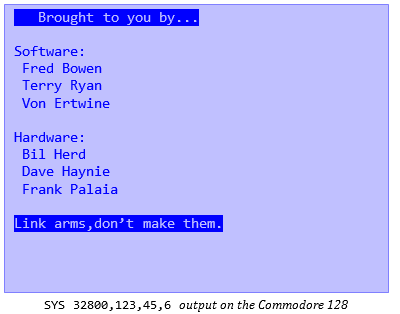 A special command like the one above is one approach to activating Easter eggs—the Grand Theft Auto series uses it extensively, for example—but there are many others. Games are famously loaded with secret key sequences and controller combinations, although completing certain in-game actions or achievements (often in a particular order or within a specific time period) is increasingly more common in today’s titles.

For example, there is a secret destructible wall in Batman: Arkham Asylum that leads to the Warden’s hidden office. Break through this wall in the game to gain access to a special blueprint for Batman: Arkham City, the next game in the series.  Similarly, esoteric actions in other games lead to the sudden appearance of a chicken (Gears of War 3), death by maniacal ice cream truck (Hitman: Absolution), or giant squid sightings (Assassin’s Creed II).

In some cases, you just have to position your character in the right place at the right time. For example, look through a sniper rifle in a specific direction from a particular spot in Call of Duty: Black Ops II and you’ll get a jump scare that is truly terrifying. (That Easter egg is especially fun to share with loved ones.)

There are no limits on what an Easter egg can do.  Enter “volcano” as the text to display in the Windows 3D text screensaver (before Windows XP) and it would instead cycle through the names of volcanoes in the US. Other Easter eggs award extra lives, unlock special powers, change the environment to a circus theme, reverse gravity, display a ninja squirrel, or play creepy music.

Easter Eggs for Fun (and Profit)

It turns out that there are sound business reasons for including Easter eggs in your applications, even if you haven’t considered doing so before. Easter eggs can generate buzz, especially if you hint at their existence or strategically release activation instructions to key influencers or social media.

Posting a screenshot that shows a secret avatar or weapon will encourage users to explore your application more closely, looking for the Easter egg to unlock it. More time in your app means greater user engagement, which leads to higher monetization.

You can also use Easter eggs to help build your personal brand and increase virality of your apps. Use them to express a common theme or motif between titles, or recognize (and maybe reward) the first person to discover each one. If you become known for including Easter eggs in your work, it will drive interest in future releases and updates.

Don’t be afraid to experiment! Make your Easter eggs as lighthearted or as serious as you want, and let your imagination guide you. There are thousands of Easter eggs out there, but users never seem to tire of finding new ones. Use this to your advantage: include Easter eggs in your own software to encourage engagement, build your brand, and drive interest when it’s time to publish your next app or update.

We want to hear about your Easter eggs experiences. Go to our Facebook page to tell us about your favorites, or share cool Easter eggs you have created yourself. You can also tweet them with the hashtag #AppEasterEggs.

An Easter Egg for You

With the Easter holiday coming up, we thought it would be fun to hide something special for you. Go to www.amazon.com/appstore and look for our overflowing Easter egg to unlock great discounts as low as $0.99 and Amazon Coin rewards (up to 50% back) on select top titles from today through Saturday. Happy hunting!

If you’re not familiar with the famous Easter eggs mentioned above, here is more information about each one: