In the realm of classic puzzle games for mobile apps, Bitmango is no newcomer to this genre. The South Korean company launched in 2011 and has a focus on casual mobile games that challenge the way people think. Games such as Draw Line Classic and Draw Line Bridge, (downloadable here) are available on the Amazon Appstore.

We recently chatted with Yewoon Seo who is the publishing team lead for Bitmango. Yewoon took us in depth on how Bitmango is performing on the Amazon Appstore, the team’s experience on getting their app onto the platform, and some things that surprised their team about our services.

Expanding and reaching more customers has always been one of Bitmango’s priorities, which is why Bitmango decided to look into the Amazon Appstore. “I noticed that the Amazon Appstore platform was similar to Android so I immediately knew there was a huge potential here,” says Yewoon. The team initially built their apps on Google Play, so the team worked on moving their apps over onto Amazon Appstore. So how hard was it to transition their game over? The team was pretty surprised at the little amount of work needed to complete the task.

“There’s not much effort at all to port our app from Google Play to the Amazon Appstore. It took us approximately one to two hours per app, by just tweaking the API. For our app the certification process was only a day, which was something we have never seen before in any other store. ”- Yewoon Seo

The team has already received tens of thousands of downloads, which has given them the kind of expansion they were looking for.

ARPU that was worth the investment

“Results were great,” according to Yewoon. Their main app “Draw the Line: Classic” has performed really well in the Amazon Appstore in the US in terms of average revenue per user (ARPU). 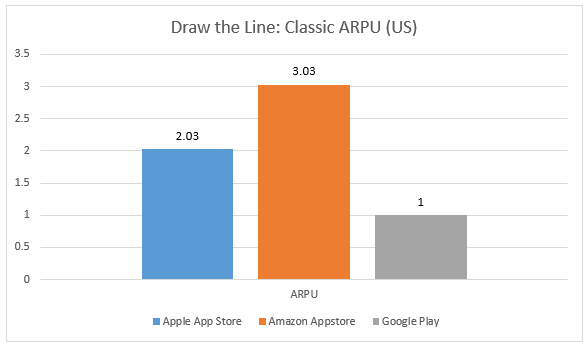 But their app success didn’t stop there. When “Draw the Line: Classic” was compared to other app stores in terms of all the countries where the game was available, the app consistently outperformed others in terms of average revenue per user. 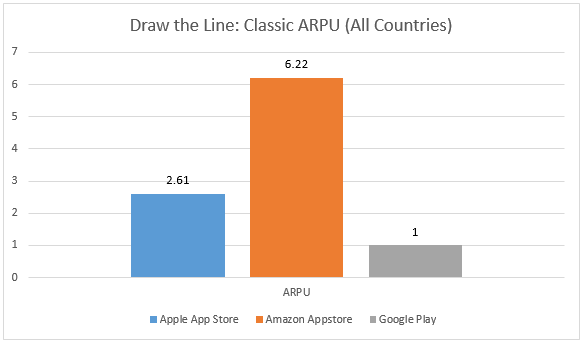 “Since the platforms between Google and Amazon are so similar there was not much effort needed to move our app over,” says Yewoon. In terms of effort needed to achieve these results, the team was very satisfied with the results.

From customer centric to developer centric

“The amount of detailed feedback that the Amazon reviewers provided during the submission process was a huge surprise to us and something we’ve never seen before. These are things that really saved us time and something we really appreciated,” says Yewoon.  Yewoon mentions that they appreciated that the Amazon team provides help for their developers in a variety of ways to answers their questions. “Sites such as the Amazon Apps and Services Developer Portal  really helped us when we needed help on specific topics or issues,” says Yewoon. The Amazon Apps and Services Blog is always updated with the latest announcements, updates, and also provides detailed tutorials.

“We’re so impressed with the service that moving forward we plan on integrating additional APIs from the Amazon Mobile App SDK over to our existing apps. We’re thinking of integrating Amazon Mobile Ads API and Amazon GameCircle API with WhisperSync for Games, for a better in game experience.” – Yewoon Seo

Learn more about the tools used by Bitmango