We frequently hear from developers that allocating resources and prioritizing investments can be a tough decision.

Tivola, a kids and family games publisher based in Hamburg, Germany, was not sure if they should build an Android version of their apps until they heard that apps were monetizing well on Amazon – sometimes even better than on other Android platforms. The return on investment that Amazon could potentially deliver inspired them to take the plunge, with Amazon as their Android partner. Their apps were live when Kindle Fire tablets and Fire TV launched in the US, and today they see Amazon as a core part of their strategy.

Recently we had the chance to meet in person with Hendrik Peeters, COO of Tivola, and he shed some light on Tivola’s experience with Amazon.

Tivola Goes from PC to Game Consoles to Mobile Devices

The developers at Tivola are the creative brains behind 50 apps, including PetWorld 3D and the popular Fire TV game Grandpa and the Zombies. Founded in 1995, Tivola has nearly 20 years of experience building innovative and entertaining apps and games for kids and families.

Tivola is quick to respond to the constantly evolving business environment. They have pivoted their strategy and moved from selling games on PC CD-ROM, to games consoles, and now to apps and games on mobile devices. Tivola published their first iOS app in 2011 and chose Amazon as the first platform on which to publish their Android apps in 2012.

Reflecting on why they built Android apps for Amazon first, Hendrik says that what ultimately affected the decision was the personal support they knew they would get with Amazon. Hendrik states that monetization on Amazon is stronger than expected, with ARPU being 33% higher than on alternative Android platforms. In the US specifically, ARPU for free titles is up to 4 times more than on Google Play. Hendrik ties the high monetization they’ve seen to Amazon’s customer base:

“Amazon provided a unique platform where we can distribute apps to an audience of invested parents who are interested in high quality content and are happy to pay money for it.”

As a kids and family games publisher, Tivola acts very carefully when offering in-app purchasing, so a customer base who is willing to pay for an app upfront plays a crucial role in Tivola’s success. Indeed, Tivola’s preschool-level games perform very well on Amazon, achieving ratings of 4.7 stars on Amazon.de.

70% of Revenue from International Markets

Having understood early on that they have to distribute their apps globally, Tivola have emphasised localisation to expand abroad successfully. For example, Tivola worked very hard to publish Grandpa and the Zombies in 9 different languages, which, according to Hendrik, was a crucial customization to reach customers outside Germany. Indeed, localisation has enabled that 70% of revenue from their kids games and casual games now comes from outside Germany. The Free App of the Day promotion of Grandpa and the Zombies exemplifies this success, with 2/3 of downloads coming from the United States. 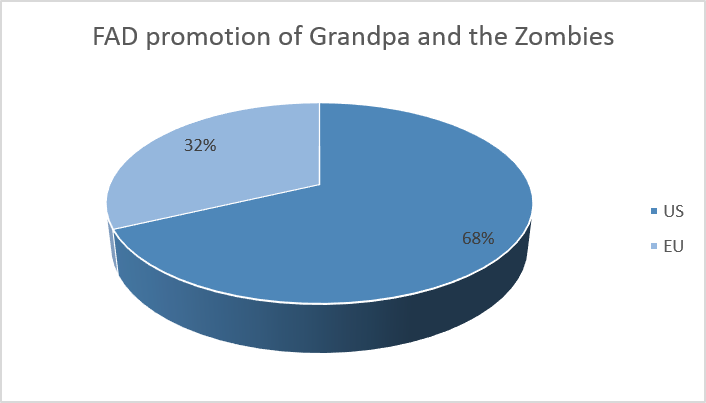 Tivola Published Their Apps on Fire TV for Day of Launch

Confident in their success on Amazon’s tablet devices in the US, Tivola decided to have their apps live on Fire TV for when it launched in the US in April 2014. Indeed, their game Grandpa and the Zombies was one of the first apps on Fire TV. As Hendrik explains:

“We were excited to be part of something big. We saw it as investing in the future and we wanted to be there from the beginning.”

He strongly encourages developers to be present on a platform from the very beginning. As Tivola discovered first-hand with Fire TV, the high discoverability they got from a brand new platform is a clear advantage and incentive to invest in it.