Getting the right exposure for your app is a key ingredient to making it successful. Amazon already has several programs which developers can leverage to help drive visibility to their apps, and developers who want even more visibility think outside the box to tailor their customer experiences to increase engagement with their apps. Tribeplay is one of those game publishers who did just that, by issuing a price discount promotion that drastically increased their revenue. 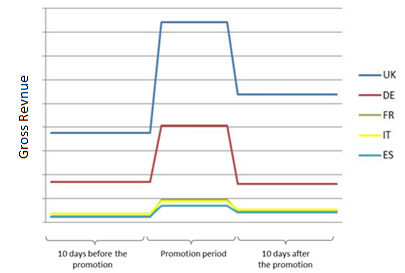 The team which is based out of China has been building apps since 2012 and created the series of games under the title Dr. Panda that first appeared on iOS and Android. According to Tribeplay, making their Android Apps available on the Amazon Appstore required “little to no extra tweaking.” Tribeplay added that “one of the best things about the Amazon Appstore is that there wasn’t much work to get our apps on there. We already develop for Android, so getting our games on the Amazon Appstore was a real breeze.”

The games are available worldwide, but the team wanted to increase sales in Europe so they discounted the price of their apps by more than 50% in select countries. By doing so, Tribeplay saw their gross revenue more than double in UK, Germany, France, Italy, and Spain.

So how did the team accomplish this? Tribeplay ran banners highlighting their price promotion, which caught the attention of customers in the Amazon Appstore. When the Amazon Appstore recognized that their app was trending in customer popularity, Amazon assisted by providing more visibility for the app. “The suite of tools for promotions and sales [that Amazon provides] to help market our apps on the Amazon Appstore more effectively are very valuable.” said Tribeplay, the creators of Dr. Panda. The team saw the app’s sales more than double during the time period, when they increased the visibility of their app.

Aside from the sales uplift, Dr. Panda was also able to reach a new and unique developer audience on Amazon. “Amazon Appstore is a fantastic platform for us and continues to get better. Through Amazon we’ve been able to reach a whole new demographic and really succeed with them. The fact that the Kindle Fire device line is so integrated to the store has also been a great benefit for both developing and marketing our apps with Amazon customers in mind.” The teams recently joined the Appstore Developer Select program and integrated the Mobile Ads API and are excited to see how the results will turn out. By participating in these programs, the team will receive additional impressions for their app, home page placements, and customized ads for their app in the US.

So how can you increase visibility? Besides having your app perform well, you can ensure your app qualifies for the Appstore Developer Select program, or get your app featured in the Free App of the Day program. If you’re looking for something similar to what Tribeplay did with their promotion, check out the Developer Promotions Console, which allows you to easily discount your apps. Getting your app onto these programs only requires a couple pre-requisites and they all aim at providing visibility for your app. For example, for your app to qualify for the Appstore Developer Select program, it must utilize relevant API’s such as Amazon In-App Purchasing, Amazon Mobile Ads, and Game Circle that all contribute to enhancing the user’s experience in your app. If you need help with these requirements we have a lot of resources available as well. “The Amazon team has always been amazing with their help and advice. Questions we ask are always answered promptly and accurately, and any problems we’ve had have been solved super quickly.” says Tribeplay.